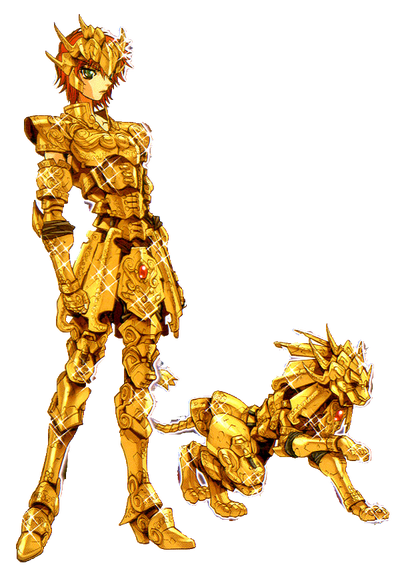 Leo Aiolia is the Gold Saint of the Leo Constellation from the 20th Century, and the younger brother of Sagittarius Aiolos. He is a secondary character of great importance during the original manga, and the primary protagonist of the prequel Saint Seiya: Episode G.

Superhuman Physical Characteristics, Flight, Telepathy, Telekinesis, Electricity Manipulation, Healing, Energy Projection, Matter Manipulation (Atomic Manipulation, and Destruction along with Macro-Quantum Destruction when moving at FTL speeds), Durability Negation (Via destroying the soul directly, and destroying the targets atomic, and macro-quantic structure), Paralysis Inducement (His lightning can paralyze people), Dimensional Travel (Can travel across dimensions), Non-Physical Interaction, Soul Manipulation (Can directly attack and destroy the souls of others), Reactive Evolution (Able to analyse and comprehend the components of an enemy's attack after seeing it once), Instinctive Reaction (Saints can react, respond, and detect danger while unconscious), Pressure Points (The Star Life Points are pressure points on the body), Probability Manipulation, and Statistics Amplification (Through the Power of Miracles impossibilities can be turned into certain possibilities, as well as increase their stats such as speed, and power), Aura, and Heat Manipulation (Upon powering up their Cosmo they cause the area around them to burn up with intense heat, and their attacks are also imbued with heat), Extrasensory Perception (By virtue of the 6th sense, the 7th sense, and the 8th sense), Enhanced Senses (Capable of tracking events taking place over a large distance including other realms. Can hear bones breaking from a distance away. In addtion, they also have the 6th, 7th, and the 8th sense), Reactive Power Level (The skills of the Saints continues to improve throughout their fights, and They continue to get stronger everytime they gets knocked down)

All previous abilities, Resurrection, and Immortality (Type 4 - After obtaining the 8th sense, he gained absolute control of his own soul, and can resurrect himself), Non-Corporeal (exist without a body, as a soul)

Speed: FTL initially (Surpassed the Speed of Light and hit moving photons, even when he was a rookie with little control of the 7th Sense) to Massively FTL+ normally, Massively FTL+ through Miracles (Should be comparable to Capricorn Shura, who moved faster than the initial expansion of the universe at the Big Bang) | Massively FTL+

Stamina: Nearly limitless (Gold Saints are stated to be able to fight for a thousand days); The Saints can keep fighting despite suffering through severe damage, and even critical damage that would otherwise kill a person. They can survive under the sea in near freezing point tempatures for close to 2 hours. Survive in Oxygen thin air while being near death by losing more than half their blood at the same time, and fight through critical damage to the heart.

Intelligence: Aiolia is a skilled fighter and can adapt well to powerful enemies and techniques.