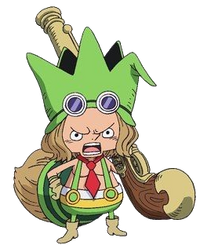 Leo is a dwarf from Tontatta Kingdom who first appeared on Green Bit, where he, along with a group of other dwarves, attacked some Marines. He is the "Tonta-troop leader" (トンタ兵長 Tonta-heichō?) of the Tontatta Kingdom. He is the 5th division commander of the Straw Hat Grand Fleet.

Standard Equipment: He wears a pair of needles strapped to his belt, to use his Nui Nui power. It is unknown if he uses them as actual weapons.

Weaknesses: Standard Devil Fruit weaknesses. Short range, Tontattas are gullible and as such Leo is easy to deceive.

Notable Attacks/Techniques: Leo basically uses this power to stitch and hold down his targets. He also uses this ability to support objects, during earthquakes, to make sure they do not fall. It can also be used to reattach severed limbs, although irregular wound edges may compromise its efficiency.

Start a Discussion Discussions about Leo (One Piece)