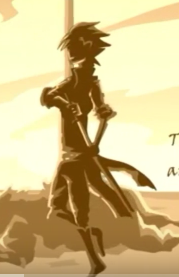 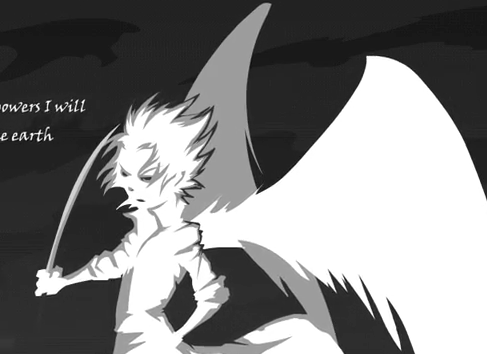 Leo is the central protagonist of the third game in the Armed With Wings series. The fatherless child of Eivana, born after the downfall of Vandheer Lorde in a small forest village, Leo lived a carefree live of monster-hunting until the day his mother and several villagers were kidnapped by a warlord named Gaaz with the intent of sacrificing them to Network. On his quest to save them, Leo eventually comes into conflict with a freed Vandheer Lorde, and discovers that he, like Lone Warrior before him, is destined to become Blackmist's champion and avatar.

Powers and Abilities: Superhuman Physical Characteristics, Immortality (Types 4 and 8, the Blackmist will bring him back to life as long as it exists), Master Swordsman, Martial Arts, Teleportation, Healing, Animal Manipulation (Can freely control his eagle), Energy Manipulation and Ice Manipulation | All previous powers on a much higher scale, as well as Resurrection, Light Manipulation, Forcefield Creation, Darkness Manipulation, Soul Manipulation, Matter Manipulation, Power Bestowal, Omnipresence, Omniscience and likely many more (Has all the powers of Blackmist)

Speed: Massively Hypersonic+ (Equal to base Eivana who is capable of dodging Vandheer Lorde's lightning) | Omnipresent (As Armed with Wings he should have all the powers of Blackmist)

Striking Strength: Multi-City Block Class (Can hurt comparable beings with his punches and kicks) | At least Universal, likely Universal+ (Beat both Network and Vandheer Lorde with one attack)

Standard Equipment: A one-handed sword lent to him by Lone Warrior and Eivana.

Intelligence: Gifted. A prodigal warrior, superior to his mother by a vast margin in his early teens. Mastered Traditional Karate and the Deadly Cut swordsmanship style in a day and eventually learned and mastered God Fist and God Cutter in the same way, both of which are notoriously difficult for the user to control. | Omniscient

Weaknesses: Often lets his guard down, forgetting to make sure enemies stay dead | None notable

Key: Base | Armed With Wings

Start a Discussion Discussions about Leo (Armed With Wings)