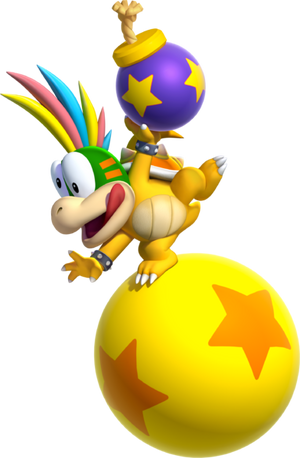 Lemmy Koopa is the smallest member of the Koopalings, one of Bowser's elite fighters in the Koopa Troops. He is usually associated with his magic balls with star-shaped patterns all around it. He's depicted as a silly, innocent, fun-loving and immature child who enjoys playing and would favor in partaking in circus acts rather than causing misdeeds, but has been shown capable of being serious when the situation calls for it. Like most of the Koopalings, he is named after a famous musician. Lemmy is named after the English musician and founder of a heavy metal band, Lemmy Kilmister, due to the character preferring to do his own thing, regardless of what other people think.

Age: Unknown, likely around his teens or younger

Speed: Massively FTL+ (Capable of keeping up with the Mario Bros)

Intelligence: Despite what his lazy eye suggests, he's quite cunning in battle, utilizing trickery, his size, and acrobatics to throw his opponents off guard.

Weaknesses: He's rather immature and prefers to toy with his opponents.

Retrieved from "https://vsbattles.fandom.com/wiki/Lemmy_Koopa?oldid=6172962"
Community content is available under CC-BY-SA unless otherwise noted.