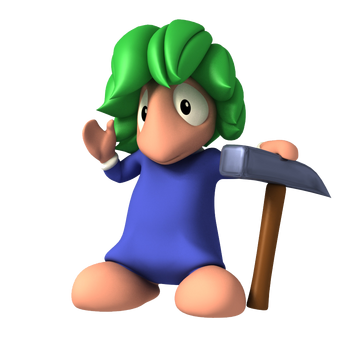 Lemmings are the main protagonists in the titular video game series, where they mindlessly walk forward, so the player has to make them avoid pits and traps by giving them special tasks, such as building a ladder, breaking walls, blocking other Lemmings, etc. When a Lemming hits a wall, it walks right back. The objective of each level is to safely guide a predetermined number of Lemmings from the start point to the exit door.

Attack Potency: At least Wall level (Can bash walls with its fists via Basher and also break them with a pickaxe)

Speed: Below Average Human, higher as Runner (Can travel faster and jump higher/further by sprinting)

Intelligence: Gifted (Are skilled in building, solving puzzles and using various weapons/tools as seen in Lemmings 2: The Tribes)

Weaknesses: Lemmings are very slow, can die from falling a great height without using Floater, only uses weapons for traversing