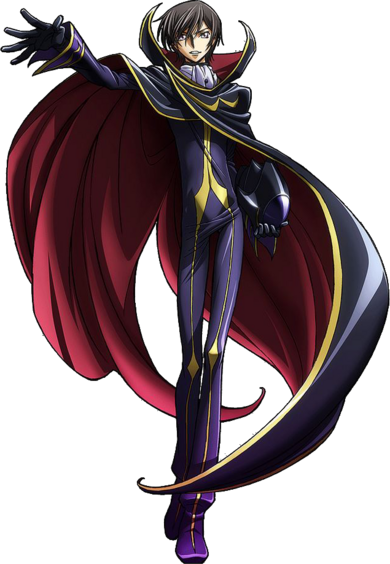 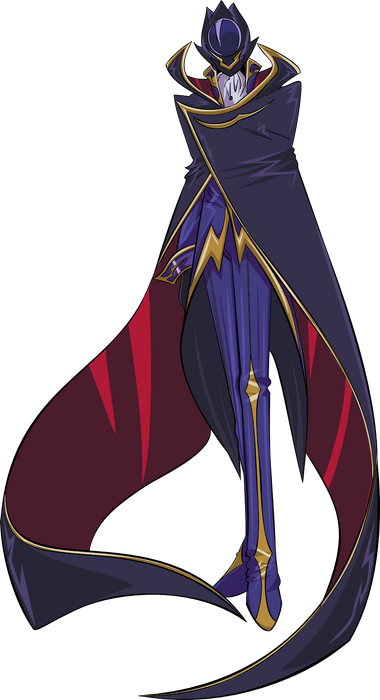 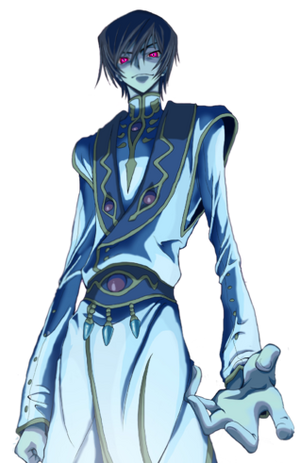 Lelouch Lamperouge is a student at Ashford Academy in Tokyo Settlement, and the Vice President of the student council. He lives with and cares for his younger sister, Nunnally. Truthfully, he is Lelouch vi Britannia, the eleventh prince of the Holy Britannian Empire, who went missing in Japan with his younger sister and was presumed dead.

Lelouch used to idle his life away, gambling and skipping school. However, after a chance meeting with C.C., Lelouch gains the power of Geass; he shakes off his life of idleness, seeking to destroy the empire of his birth as Zero, the legendary hero of the oppressed Japanese—all to solve the mystery of his mother's death and create a peaceful world for Nunnally.

Genius Intelligence, Social Influencing, Hacking (Hacked into the Damocles[1]), Mind Manipulation (Lelouch's Geass allows him to issue absolute commands to anyone he looks in the eyes,[2] ultimately commanding even C's World, humanity's collective unconsciousness,[3] which governs them across all infinite possibilities[4]), Memory Manipulation (People who act under the effects of his Geass usually forget what they did afterwards.[5][6] He can also just manually induce amnesia with a command[7]), Perception Manipulation (Using his Geass he can change how a person perceives things[8]), Matter Erasure with FLEIJA (The FLEIJA erases all matter in its blast radius[9]), Technology Manipulation with Gefjun Disturbers (Has access to many Gefjun Disturbers, which can be used to disable Sakuradite-based technology[10] and other systems[11])

Superhuman Physical Characteristics, Enhanced Senses and Information Analysis with Factsphere Sensors and Druid System (A Knightmare's sensors allow them to determine environmental conditions;[12] other Knightmares can track heat signatures[13] and map out their surroundings, including incoming projectiles and their trajectories.[14] The Druid System used by the Gawain and Shinkirō allows them to analyze and predict the movements of troops and projectiles on a broader scale, and even translate the occult data of the Thought Elevators[15]), Flight with Float System and Air Glide System, Forcefield Creation with the Absolute Defense System, Large Size (Type 0; the Burai is 4.37m tall,[16] the Gawain 6.57m tall,[17] and the Shinkirō back down to 4.67m[18]), Matter Manipulation with FLEIJA Eliminator (Counteracts the ever-changing composition of the FLEIJA with an opposing reaction to stop it from going critical[19]), Stealth System (The Gawain and Shinkirō have a stealth system that makes them invisible to radar and other tracking systems[20]), Transformation for the Shinkirō (Can transform into a fighter jet-esque form), Resistance to Technology Manipulation (The Shinkirō is equipped with measures that defend against Gefjun Disturbers,[11] and the Gawain likely is as well, given that it contains them)

Speed: Below Average Human (Easily outrun by pretty much anyone, including people in restrictive clothing, even when sprinting at full speed[34]) with at least Supersonic reactions (Only he has the reaction speed capable of properly making use of the Shinkirō's Absolute Defense System, which has to be calculated from moment to moment to properly block attacks from Knightmares[35]) | At least Subsonic (Moved to intercept a bullet aimed at Rolo's Vincent[14]) | At least Supersonic (While slow in comparison to other Seventh Generation Knightmares, like the Lancelot, as well as the Knight Giga Fortress Siegfried,[36] it can still keep up to some degree) | At least Supersonic

Stamina: Below Average (Often tired out just by sprinting short distances[21][34]) | Knightmare Frames have a limited amount of energy but can handle extended fights.

Intelligence: At least Gifted, possibly Genius, Lelouch's intellect is his greatest asset. He regularly leads his forces to victory against the numerically and usually technologically superior Britannian forces, exploiting their habits of underestimating Japanese forces and often far from airtight tactics with meticulous preparation and ruthless traps, such as triggering the Narita landslide,[52] collapsing Tokyo Settlement,[53] and activating a city-wide network of Gefjun Disturbers to disable the majority of Britannia's forces.[50] He utilizes his Geass constantly as well, setting up plenty of insiders ahead of time that will spring into action when the proper conditions are met. Thanks to this approach and these habits, he was able to throw the OSI into chaos and exploit their mistakes before setting up the means to put them all under his control,[54] controlling Rolo, not through his Geass, but manipulation and a staged 'sacrifice'.[14] He could also accurately predict what Mao[55] and Schneizel[56] would say and prepare recordings portrayed as live feeds to distract them both, and ultimately defeated the former by using his own Geass to wipe his memory of the plan he had devised to deal with him so that Mao couldn't read it.[57] With Mao, he sought to establish conditions hostile to Mao's mind-reading Geass, using crowds and exploiting his own limitations to prevent him from catching on again and again, after confirming the limits and weaknesses of Mao's Geass beforehand. However, his plans are often overcomplicated and hinge a lot on sheer audacity, prior preparations, and the fact that he used his Geass on many people involved. His chess gameplay also leaves something to be desired.

Weaknesses: Lelouch is incredibly arrogant, and his penchant for theatrics and overcomplicated plans can backfire on him. He is physically inept, unable to run fast for long periods and easily exhausted by physical labor (however, by the middle of the second season, he seems to have gained a bit of physical ability as he was able to hold onto Shirley when she fell off the roof of a building). The Geass requires eye contact and can only be used once per target. When the Geass becomes uncontrollable, he must remove his contacts to use them. All Knightmares have limited ammo and energy reserves.

- Geass: Lelouch's Geass, which he gained through his contract with C.C., grants him the power of "Absolute Obedience". Anyone he makes direct eye contact with will be compelled to do as he says. It has a maximum range of around 270 metres, works through transparent objects, and can be reflected off surfaces such as glass.[51] Anyone affected by Lelouch's Geass typically loses their memories of events occurring slightly before, during, and slightly after.[5] However, a person can only be commanded once through Geass; afterwards, it won't work on them again, unless Jeremiah's Geass Canceller negates its effects.[58]

This Geass can be used in a number of ways. Lelouch can manually erase memories,[7] insert long-term commands that will trigger under certain conditions, potentially again and again,[59][60] affect someone's senses and alter how they perceive others,[8] force people to kill themselves and others,[2] and circumvent its use limit by simply Geassing others into complete, unquestioning loyalty that will persist indefinitely.[61] He can even use his Geass on himself using a reflective surface - though he's done this once already and cannot do it again.[57] While the influence of Lelouch's Geass cannot be broken, a strong enough will can briefly stave off its effects.[62][63]

With each progressive use, Lelouch's Geass becomes stronger and also harder to control - it eventually becomes permanently active in his left eye, necessitating the use of a color contact to block out its signal when he doesn't want to use it. Later on, it fully develops, becoming permanently active in both eyes - at this point, using his matured Geass, Lelouch was capable of issuing a command to C's World, humanity's Collective Unconsciousness.[3] This implies a vast increase in potential scope, given that Lelouch went from only being able to manipulate normal humans to commanding the abstract Collective Unconsciousness, but its normal restrictions remain.