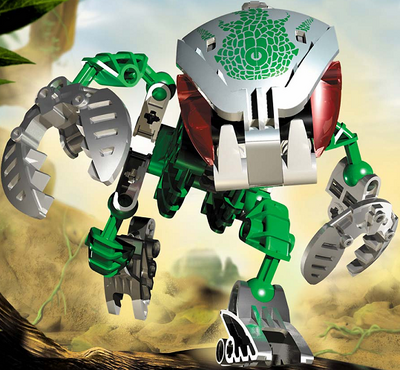 Lehvak-Kal is one of the Bohrok-Kal, an elite squad of six mutated Bohrok made by the Bahrag as a failsafe in the event that they were somehow defeated, meant to reawaken them. It was originally an Av-Matoran, prior to its transformation into a Lehvak, and then its mutation into its current form.

Powers and Abilities: Superhuman Physical Characteristics, Air Manipulation and Absorption, Telepathy, Fusionism (Can fuse with other Bohrok-Kal), Forcefield Creation with Krana-Kal, Enhanced Senses with Ja-Kal and Yo-Kal, X-Ray Vision with Bo-Kal, Resistance to heat and cold with Su-Kal, Longevity

Attack Potency: City level+ (Superior to regular Bohrok, and comparable to the Toa Nuva, such as Pohatu Nuva, who reduced Odina Fortress to dust. Defeated the Exo-Toa alongside the other Bohrok-Kal).

Speed: Massively Hypersonic+ (Comparable to Toa, who can fight with Avohkah, lightning-based Rahi that possess the properties of lightning and were mistaken for lightning bolts, as well as Rahkshi and Makuta who can manipulate electricity), possibly Relativistic (The Toa Inika could react to and dodge Umbra in his light form).

Intelligence: Lehvak-Kal has the animalistic cunning of the Bohrok, enhanced further with a deep analytical intelligence.