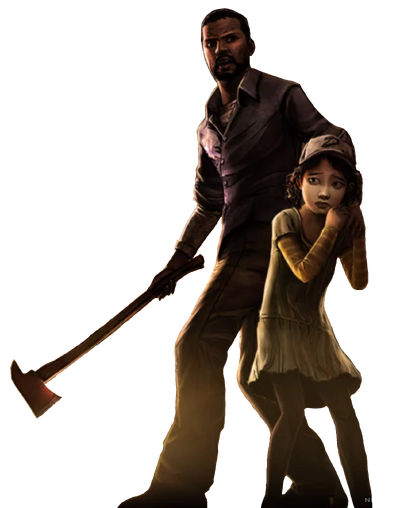 Lee Everett is the protagonist of Season 1 of Telltale's The Walking Dead. He was on his way to prison when the outbreak happened, and was saved from jail by a walker causing his car to crash. He allied himself with other survivors and took up the mantle of Clementine's guardian, building a plan to escape America. However, he was bitten and killed in Savannah while trying to save Clementine from The Stranger.

Powers and Abilities: Peak Human Strength and Durability, very high pain tolerance (While searching for Clementine, he continued to function well after a walker bite, having his arm sawed off, severe internal bleeding and multiple gashes), Weapon Mastery (several firearms and melee weapons), Skilled in close-quarters combat (Can fight and overpower Molly, a skilled martial artist who can easily trounce on Kenny and fight groups of Walkers bare-handed), some degree of stealth

Attack Potency: Street level (Overpowereda Walker, and managed to push back multiple walkers trying to break down a door. Comparable to Kenny, who did this. Can trade blows with others who can harm him, such as Molly and Kenny)

Stamina: High. Lee was able to function (fought against a street full of walkers) under the effects of a Walker bite and other debilitating injuries up until a few minutes before his death

Range: Normal melee range. Extended melee range with the axe, and tens of meters with firearms.

Intelligence: Above Average. Lee had taught at the University of Georgia for six years. He is also very resourceful in a survival situation and was the only member of the group to figure out that the St. John's were cannibals

Start a Discussion Discussions about Lee Everett (The Walking Dead)