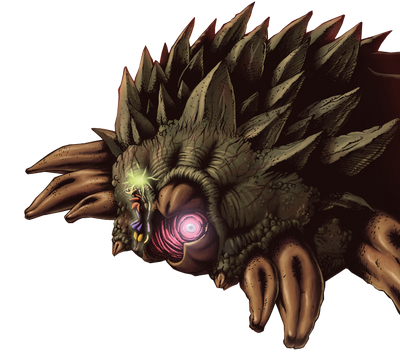 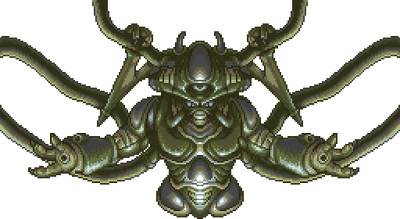 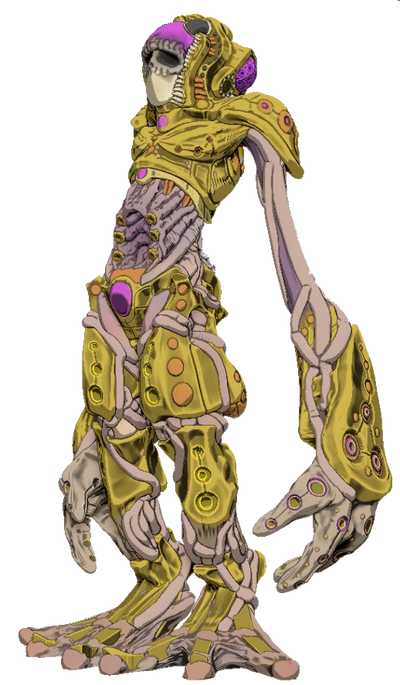 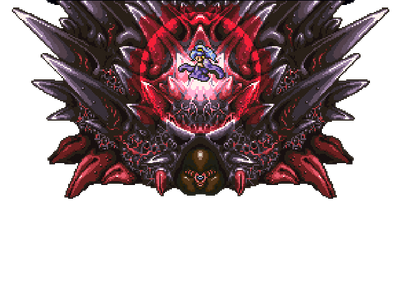 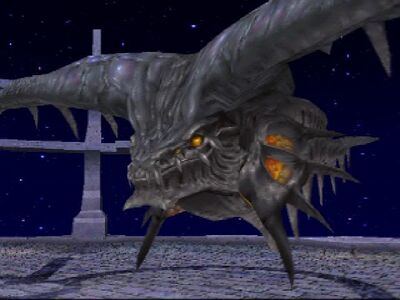 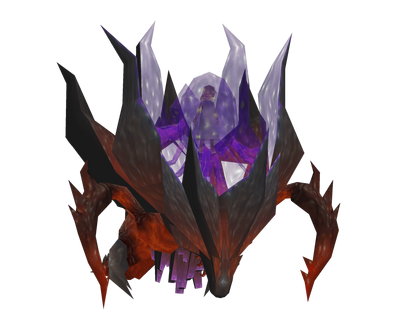 Lavos is Chrono Trigger's main antagonist and final boss, an alien parasite which crash landed in the year 65,000,000 B.C. It was named "Lavos" by Ayla, a word she made up from the root words "La" meaning "fire" and "Vos" meaning "big" in the Iokan language. Lavos' true name (if it even had one) is unknown.

Superhuman Physical Characteristics, Energy Manipulation, Darkness Manipulation, (copied the powers of Magus), Forcefield Creation, Time Manipulation, Cosmic Awareness (has a complete perspective of the infinite timelines of the multiverse , perceiving every time period and alternate selves there are), Flight, Fire Manipulation, Vibration Manipulation (via Annihilation Zone), Water Manipulation (Via Water Surge and Nereid Cyclone; copied all of Hekran's powers), Air Manipulation and Vacuum Wave attacks (Copied Masa and Mune), Memory Manipulation (Scattered Schala's memories with the Frozen Flame), Light Manipulation (with Annihilation Ray and Heavenly Tears), Explosion Manipulation (via Doors of Doom, Shadow Doom Blaze and Blanket Bomb), Power Bestowal (Non-combat applicable. The Frozen Flame can grant powers to those who make contact with it, on occasion) Absorption, Energy and Magic Absorption, able to reduce and negate magical defenses, attack absorption and barriers with the powers of Masamune, Time Travel and Rewind (Schala's pendant powered by Lavos could send Kid back in time, and reversed time if Kid got in danger), Teleportation (can teleport itself or teleport large objects such as boulders), Technology Manipulation (copied the powers of the Dragon Tank and the Guardian, can construct perfect replicas of machine extensions, controls the Mammon Machine which transforms several types of energy into attack power), Immortality (Type 1 and 2, can keep fighting even as a fragment of its core), Body Control (Can separate its "mouth" to attack and like its spawn, can survive as just that. Its inside is much bigger than its outside), Power Mimicry (able to copy the entire skillset of a target by looking at any point in Time. Copied beings include lifeforms that were extinct, Magus, beings that were already destroyed and machines that weren't even created yet. Is also able to copy servants and summons of the target to act as extensions of its being), Status Effect Inducement (can inflict temporary Blindness), (can induce chaos via Chaos Zone/Confuse, wears down and drains the opponent's vitality with Sap, drastically decreases defenses with Sleep, Slows down with Unholy Light, completely immobilizes with Stop), Sleep Manipulation, Healing, Regeneration (Mid-Low; Can regrow arms as Lavos Body), Poison Manipulation (via Umbral Embrace/Shadow Slay), Resurrection (Can bring itself from alternate timelines and being wiped from existence just sent it to the Darkness Beyond Time), Electricity Manipulation, Darkness Manipulation, Pocket Reality Manipulation (Its presence alone created a spatiotemporal rift to fight in), Earth Manipulation, Duplication (Its final form split into 3 targets), Healing, Statistics Amplification, Mind Manipulation and Control (mind-controlled Queen Zeal while sleeping beneath the waves. The Masamune in Chrono Cross, which is the same one empowered by Lavos' energy, causes those who touch it to go insane with killing intent), Psychokinesis and Telepathy (copied from Azala, can be used to inflict Sleep), Durability Negation with Demon Star (cuts the opponent's life energy in half), Causality Manipulation ("Killing" it created many time paradoxes which influenced Chrono Cross, and influenced Kid's pendant, which restores her body and mind to the last point in which she was safe), BFR (Can send others to different points in space and time, to the end of time or to non-existence in the darkness beyond time), Danmaku (Via Rain of Destruction), Acausality (Type 3), Soul Manipulation, Spatial Manipulation, Can kill people on a level where even conventional time travel couldn't bring them back (killed Crono in a way that the team couldn't just return to the present and retrieve him, and had to use the Chrono Trigger to bring him back), Portal Creation, Can void immunities, Biological Manipulation (Is directly responsible for the evolution of all lifeforms on the planet), Empathic and Morality Manipulation (Made the kind Schala want to destroy existence. Can also inflict the Berserk status. Touching the Frozen Flame, a fragment of Lavos, messes with their personality and becomes an arbiter), Homing Attack, Gravity Manipulation, Matter Manipulation (On a molecular level), Magic, Power Drain (Drained Magus' powers with a casual attack), Age Manipulation (The Frozen Flame, a fragment of Lavos, is the reason Schala was "cloned" into the much younger Kid), Blood Manipulation, Sealing (can seal and unlock Portals as well)

Same as before, plus Immortality (Type 5), Memory Manipulation, Reality Warping, Conceptual Manipulation (Type 2 - Alteration and Destruction), Dream Manipulation (can consume intangible constructs such as thoughts, dreams and memories across timelines), higher energy absorption (Drains all the energy from the target - can drain magic users, non magic-users (such as Ayla) or even machines such as Robo who do not wield Magic when physically attacked), Magnetism Manipulation (Schala, part of the Dream Devourer at this point, caused a cross-temporal magnetic storm), passive absorption of Magic and Energy Attacks to heal itself (as well as elements which include Light, Lightning, Dark, Fire and Water), counters attacks with Chaos Zone, Can BFR to 2-D, Regeneration (Mid-Godly, came back even after being erased to the Non-existence of the Darkness Beyond Time), Non-Corporeal (Exists in non-existence), Existence + Nonexistence Erasure (Did this to several individuals, places, and timelines), Can kill individuals through their avatars or other facets of themselves, Negation of the abilities that pertain to its survivability (Managed to successfully cannibalize alternate versions of itself)

All previous abilities to a much greater extent, in addition to Immortality (Types 1, 2, 4, and 9), vastly superior Pocket Reality Manipulation (can create and dispel/replace pocket realities), Holy Manipulation (Can use Holy Light which annihilates Undead. Also has control of all the Elements that compose the Dragon God (which is composed of the 6 Element Dragons + Harle (giving it far more powers)), including the White Element which focuses on Holy and Healing Techniques), Disease Manipulation (Can grant the Flu status), Fear Manipulation (Via giving the Afraid status), Can erase someone to the point where they are denied the right to have ever existed, Summoning (Can summon Death via the GrimReaper element), Information Analysis (via the InfoScope element), Can turn all of the opponent's attacks into a certain element (via TurnRed/Blue/Green/Yellow/White/Black), can amplify magic defense or reduce it (via casting StromgMinded and/or WeakMinded), and even greater Sealing (Can seal any, and even all elements with AntiRed/Blue/Green/Yellow/White/Black, and SealAll)

Attack Potency: At least Country level (Completely destroyed the surface of earth with his Rain of Destruction, though it took many impacts that individual total to 40 Teratons), possibly Large Country level+ (It's power was used to lift Zeal into the air) | At least Universe level+ (Overloaded the timeline leading to the Day of Lavos with its mere presence. Stomped the main with a single blast), possibly Multiverse level+ (Schala stated that Lavos could end all of existence while she was being absorbed by the Dream Devourer) | At least Multiverse level+ (Can devour and return to nothingness all of space-time, which has infinite timelines in the Chrono universe. Unfathomably more powerful than his previous form. Vastly more powerful than the Frozen Flame, which is simply a literal fragment of him in which is a simple tool to him, and said object dwarfs beings of this level that dwarf beings of this level and so on), possibly Low Complex Multiverse level (Managed to not only fight with Serge equipped with the Chrono Cross, but that alone couldn't have stopped it, and would've absorbed Serge and the Chrono Cross if not defeated in the specific way it was)

Speed: Sub Relativistic+ (Kept up with Crono and the other heroes), Massively FTL+ travel speed | Infinite (Exists in the Darkness Beyond Time, a realm beyond even the End of Time, where time doesn't flow) | Immeasurable (Comparable to the Chrono Trigger and Chrono Cross)

Range: Multiversal+ (Through harnessing the Frozen Flame's energy, even the scientists of the El Nido Archipelago would be able to have complete control over space-time across the timelines, said artifact being a fragment of Lavos) | Multiversal+ (Devours dreams, thoughts, and memories across timelines.) | At least Multiversal+, possibly Low Complex Multiversal

Intelligence: Nigh-Omniscient due to perceiving the events of all the infinite timelines at once.

Lavos Core which trolled everyone who attacked the center.
Add a photo to this gallery

Khârn the Betrayer (Warhammer 40,000) Khârn's Profile (5-A Lavos was used. Speed was equalized)

Unicron (Transformers) Unicron's Profile (Both 2-A, Time Devourer is used)