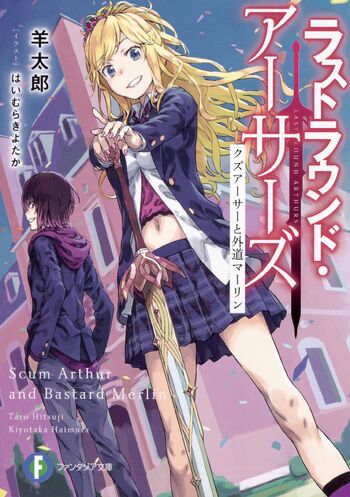 Last Round Arthurs is a light novel series written by Tarou Hitsuji and illustrated by Kiyotaka Haimura.

In the past, magic was common. However, as time passed humanity's belief in the supernatural started to fade, replaced by science and modern knowledge. This caused magic users to dwindle and the world to be divided into two; the Real World where humans live and the Illusory World, where fairies, gods and other apparitions were forced to live; separated by the boundary rooted in humanity's collective consciousness known as the Curtain of Consciousness. However, a prophecy states that in the near future the Curtain of Consciousness will collapse, causing everything to rever to the time of myth, where gods and monsters dominated humans. In order to prevent this event, known as the Catastrophe, the organization known as Dame du Lac has organized the King Arthur Succession Battle. Eleven descendants of King Arthur's bloodline will compete against each other to become King Arthur's legitimate successor and receive the power to conquer the world and the duty to face the Catastrophe.

Rintarou Magami is a teen genius whose inhuman talents making him easily succeed at anything he tries. Bored by the lack of challenge he faces in the normal world, he accepts the invitation he receives from a mysterious woman to join the Succession Battle. Just for fun, he decides to support the weakest candidate, Luna Artur, to make a challenge for himself. However, Luna Artur is not the kind of person he was expecting...

Fighters in the verse range from Subsonic to Supersonic+ in speed and are casual Wall level. Magic in the verse lacks AP feats so far, but it includes things like Mind Manipulation, Illusion Creation and the creation of pocket dimensions that can be used to trap the enemy.

Start a Discussion Discussions about Last Round Arthurs