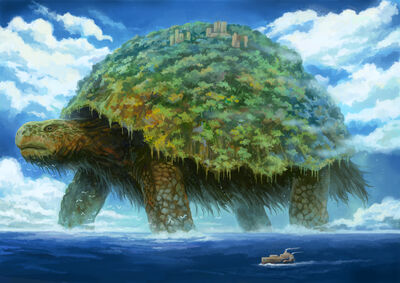 In fiction, there are many characters of Large Size. When it comes to tiering them their size alone can be an indicator of their statistics. This page explains which statistics can and can't be calculated from size alone.

The physical attack potency, and with it the durability, can be estimated from the size of a character alone.

That follows a simple conservative estimation: Any character can at least just fall unto someone. In other words, their potential energy can be used to attack. The only prerequisite to this method is that the character should be at least Type 0 Size on the Large Size scale.

In order to perform the calculation one will need the mass of the character and its center of mass.

The center of mass of a human-shaped character is about 10 cm below the navel, albeit this varies from individual to individual. Generally one can estimate that it is around 50% of the body height up.

In order to find the mass of the character upscaling methods are helpful. If the character is x-times larger than its normal-sized counterpart, and made of roughly the same materials, then its mass would be about x^3-times larger.

With this information, the energy can be calculated via the usual GPE methods.

Except for very large characters that is simply "Potential energy = mass*9.81*height of center of gravity". Mass should be in kilogram and height in meter. The result is in joule.

The best practice is to measure the speed directly from the source material. Should that not be possible, but it is known that the character moves relative to its size as fast or faster than its normal-sized counterpart, upscaled speed can be used. To confirm that they are that fast, it must be clear that they, for instance, take steps within the same timeframe or less than a normal human would. If that is the case, then their speed should be x-times higher than that of their normal-sized counterpart, if they are x-times larger.

Lifting Strength could be calculated from size with only clearly defined assumptions. While it is intuitive that characters have to lift their own body weight to move around, lifting strength is the weight that they can lift in addition to that. Like any other characters, a lifting strength level has to be shown, or at least reasonably deduced, to be considered valid. Therefore, the character should demonstrate itself to be capable of performing a lifting strength feat to have the lifting strength tiered to the yield of the feat in question.

There may be evidence that the reference figures these giant characters scale up from can lift far more than their own weight (e.g. a centipede can lift up to 15 times its own weight). However, it has currently been agreed that such considerations should not been taken into account (i.e. characters only get their yields as if they are normal humans) unless there are very strong official statements, and knowledgeable staff members give particular exemptions or allowances.

As mentioned in the AP section speed can under circumstances be taken from size. An x-times larger character should also be x-times faster. However, strict confirmation is necessary.

Average Sprinting Speed = 5.55 m/s (approx. based on this and this)

Besides this, the only assumption for the first table to apply is that the density of the giant is equal to that of an average human.

Note that values below 5 meters are cut off, due to the rules regarding large size explained above.

The table is based on the gravitational potential energy and uses the method regarding that explained in the Attack Potency section above.

The following method is based on the kinetic energy method instead. This additionally needs the assumption that the speed-size ratio of the giant is equal to that of a normal human. The table will also include speed corresponding to that assumption. As faster than lightspeed kinetic energy can't be calculated, those values were excluded. This table does not consider relativistic aspects of kinetic energy.