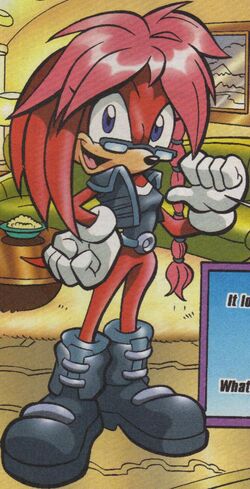 Lara-Su was Knuckles’s and Julie-Su's daughter from the alternate future timeline known as Light Mobius. She was initially at odds with her father, who refused to allow her to become a Guardian. Eventually, he relented however, only for that future to be warped almost beyond recognition by an alteration of history from King Sonic. Lara-Su and a few others recalled the rightful timeline, and together fought the despotic King Shadow. Lara-Su herself ended the fight by imprisoning him with Chaos Control. Serving as a Guardian for five years, she also became a member of the Future Freedom Fighters when Shadow returned.

Intelligence: Has received training from Knuckles the Echidna and from Chaotix members such as Espio, Charmy, Vector, and Mighty. Was skilled enough to fight and defeat King Shadow in combat.

Retrieved from "https://vsbattles.fandom.com/wiki/Lara-Su_(Archie_Pre-Genesis_Wave)?oldid=5179183"
Community content is available under CC-BY-SA unless otherwise noted.