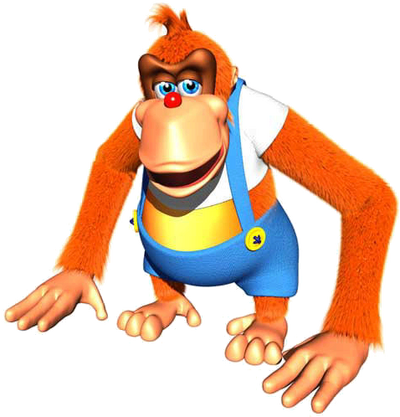 Lanky Kong is a character from the Donkey Kong series. He is an ally and relative of Donkey Kong and the Kong family. Despite his bizarre appearance and personality, he is a capable fighter thanks to his abnormal body and lengthy arms. His first appearance was in Donkey Kong 64.

Attack Potency: At least Wall level (Able to defeat and harm Puffloss, who can be compared to other Kremlings)

Speed: Massively Hypersonic (Faster than DK with his hand standing in Donkey Kong 64)

Weaknesses: He is clumsy.

Retrieved from "https://vsbattles.fandom.com/wiki/Lanky_Kong?oldid=5123484"
Community content is available under CC-BY-SA unless otherwise noted.