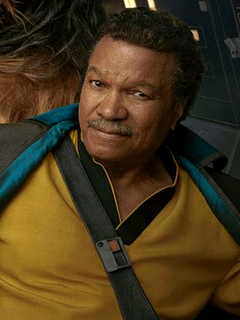 Lando Calrissian was a human male smuggler, gambler, and card player who became Baron Administrator of Cloud City and, later, a general in the Rebel Alliance. He was the owner of the Millennium Falcon before losing it to Han Solo in a game of Sabacc. After losing the Falcon, He would later become the Administrator of Bespin and eventually join the Rebellion and partake in the battle of Endor.

Tier: 9-C physically. 9-A with his blaster

Age: 34 as of the Liberation of Bespin

Classification: Smuggler (formerly), Baron Administrator of Cloud City, General of the Alliance to Restore the Republic

Powers and Abilities: Athlete level physical attributes, highly skilled marksman, masterful pilot, skilled trickster and conman, skilled at stealth and infiltration (as proven during the theft of the Imperialis and mission to Sullust)

Attack Potency: Street level physically (Has been portrayed as being physically comparable to Han Solo. Capable of knocking down Han Solo with a single blow). Small Building level with his blaster (Being a heavy blaster pistol, his X-8 Night Sniper can unleash bolts with such kind of power per shot on the highest power setting)

Range: Dozens of meters with his blaster pistol.

Intelligence: Fairly high. Calrissian has time and again proven himself to be a masterful trickster and conman, managing to accomplish such feats as tricking and getting into bed with an Imperial Governor noted for her intelligence, tricking the highly cunning crew of the Ghost, time and again smooth-talking his way out of situations where he would have likely ended up captured or executed, even orchestrating the theft of an Imperial corvette owned by Palpatine from a highly secure Sienar Fleet Systems shipyard. Calrissian is a skilled pilot: During the Battle of Taanab, Calrissian performed a piloting maneuver that impressed even himself and is the major reason for the Rebellion recruiting him as general during the battle of Endor. He is also a skilled marksman, wielding an X-8 Night Sniper as his weapon of choice which he used against Azmorigan's thugs with enough proficiency to earn him a compliment from Sabine Wren, herself a highly skilled warrior and masterful markswoman.