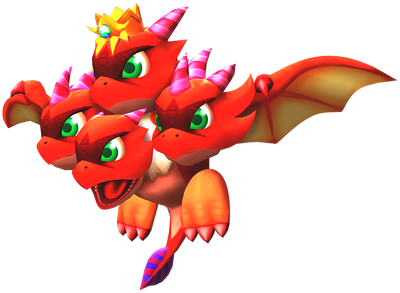 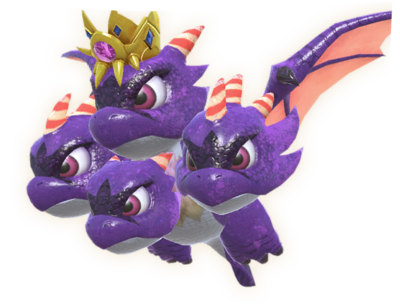 Landia is the dragon deity that serves as a guardian of ancient treasures, such as the Master Crown. Since ancient times they have lived in Halcandra, a planet that lies at the end of Another Dimension.

Age: Unknown. Has been revered as a protector since ancient times

Attack Potency: Multi-Solar System level (Fought Kirby, Meta Knight, King Dedede and Bandana Waddle Dee at once. Magolor was concerned about Kirby being able to defeat it alone. Superior to the Grand Doomer, who could create armor immune to Kirby, Meta Knight, King Dedede and Bandana Waddle Dee's regular attacks, making Kirby use one of his Super Abilities and taking several blows from it), higher in EX form (Future games describe this form as it using its true power and having the power of its crown unleashed, which should also be the case in Return to Dream Land, making it comparable to Magolor's first form with the Master Crown) | Multi-Solar System level (Fought Team Kirby/4 Kirbys multiple times, far after the defeat of Magolor), higher in EX form | At least Multi-Solar System level (As of Super Kirby Clash their last battle with Super Team Kirby was after they defeated Taranza in his final form)

Speed: Massively FTL+ (Kept up with Kirby, Meta Knight, King Dedede and Bandana Waddle Dee in combat, who could tag and dodge Landia while flying. Kept up with the Lor Starcutter in combat and while escaping the collapse of intersterial parts of Another Dimension. Flew through Another Dimension while dodging projectiles and Magolor's spatial manipulation. Briefly dodged some projectiles while flying so fast that they made the stars blur behind them)

Intelligence: Unknown, vast combat skills. Can fight many foes at once, be it Kirby, Meta Knight, King Dedede & Bandana Waddle Dee or Team Kirby. Has lived since ancient times as a guardian of legendary items and protector of the planet Halcandra. Landa has a human-like awareness of the situations around it despite being yet to show the ability to talk