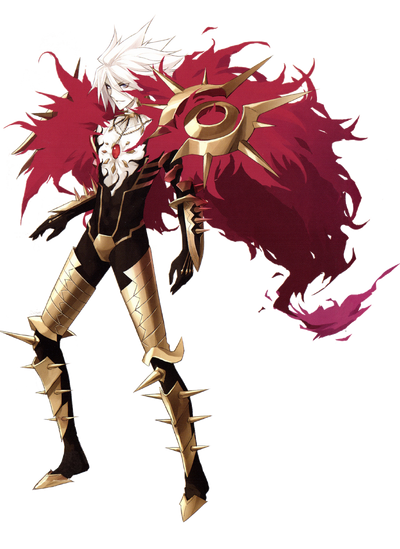 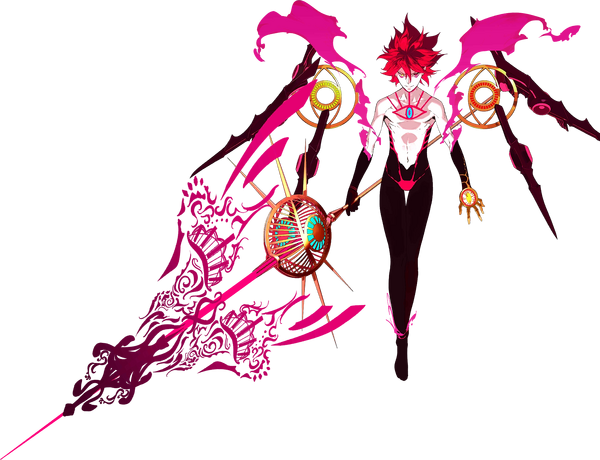 Lancer of "Red" is the Lancer-class Servant of the Red Faction in the Great Holy Grail War. While he is originally summoned by Feend vor Sembren of the Red Faction, he later becomes one of the Servants of Shirou Kotomine. He also appears in E Pluribus Unum, the Fifth Singularity in Fate/Grand Order where he can also be summoned by Ritsuka Fujimaru. In Fate/Extra CCC, he is summoned as Launcher in the Moon Cell Holy Grail War as the Servant of Jinako Carigiri. While he is still technically a Lancer, Jinako changed it due to his Noble Phantasm, Brahmastra, calling him the "Heroic Spirit of the Laser Beam".

Lancer's True Name is Karna, the Demigod Son of Surya also called the Son of the Sun God. He is a great hero in the Indian epic Mahabharata and is the rival of Arjuna. While Arjuna is the Awarded Hero who got everything he wanted, Karna is the Hero of Charity, giving away anything while not resenting anyone despite his resulting misfortunes. He was a hero who merely carried out a way of life that would not shame the name of his father. In the Kurukshetra War, he fought for the Kauravas against the Pandavas but was ultimately killed by Arjuna after suffering many curses. After his death, he was united with his father Surya.

Name: Lancer of Red, Launcher, Karna, "The Hero of Charity", "Son of the Sun God"

Attack Potency: Island level (Can wound Siegfried despite his Armor of Fafnir. Matched Vlad when he was using Kazikli Bey. His spear thrusts are said to be comparable to A-rank attacks. In E Pluribus Unum, he fought Arjuna and was steadily winning their fight). Large Island level with Brahmastra Kundala (Siegfried could only match its power by using Balmung in quick succession. Powerful enough to destroy the Fortress of Millennia, as such it should at least be somewhat comparable to Spartacus' self destruction). Multiverse level+ with Vasavi Shakti (Is capable of killing Ancient Gods from the Age of Gods and those on their level, such as Sefar) | Multiverse level+ (Was able to fight and kill Arjuna Alter who had access to the Fantasy Tree's magical energy reserves, although Arjuna was weakened by multiple different factors at that point. Has a portion of Shiva's power and thus above the likes of Mara)

Speed: Massively Hypersonic (Has A-rank agility, can keep up with Siegfried and Vlad, caught one of Atalanta's arrows mid flight) | Massively FTL+ (Capable of keeping up with Arjuna Alter and thus above the likes of Kama and Kiara)

Durability: Island level. Multiverse level+ with Kavacha and Kundala (They're a conceptual defense that reduces all damage dealt to him by 90%, turning attacks from Siegfried and Vlad into minor wounds. When utilizing Mana Burst Flames at full power, he was able to withstand Balmung. In Fate/Extra CCC, K&K was even able to block damage from the Mooncell's erasure. Blocked Arjuna Alter's Mahapralaya for few seconds. Note that K&K can be bypassed by some methods such as attacking from inside his own body) | Multiverse level+ (Capable of withstanding blows from Arjuna Alter)

Stamina: Very high. Other Servants can fight for nearly an entire day without stopping, and Karna easily shrugged off being impaled with thousands of spears from the inside out, being more annoyed than injured as he burned them away and powered on through sheer force of will. Despite being impaled by Cú Alter's Gouging Piercing Spear of Carnage in the back, he was able to survive long enough to use Vasavi Shakti.

Standard Equipment: His spear, Kavacha and Kundala, and Vasavi Shakti.

Intelligence: As one of the most famous heroes of the Mahabharata, Karna is an extremely skilled and powerful warrior, that is praised for being able to function as an Archer and Rider simultaneously while riding his chariot and wielding his bow. Despite not being known for his spear technique, his spearmanship is said to tread into the realm of gods. As such, he is recognized as one of the few Heroic Spirits on par with the King of Heroes. He is extremely adept at reading others and their body language due to his Discernment of the Poor skill, and is cold and calculating in combat, easily maneuvering his spear to strike Siegfried's vital points 78 times when the latter tried to utilize his robust body and incredible swordsmanship to gain the upper-hand. During his fight against Arjuna, he managed to steadily gain the upper hand and was about to deal a finishing blow before Cú Alter stabbed him in the back. Due to his sheer power and technique, he is singled out as the single most powerful Servant of the Great Holy Grail War, with the only one capable of rivaling him being Achilles. While holding back, he stalemated Vlad III despite his reputation as an "absurdly overpowered Lancer".

Weaknesses: Karna's magical energy consumption is extremely high, preventing him from making full use of his abilities and taking up most of his Master's magical energy supply. He is also extremely obedient, obeying his Master's orders without question and following their will to the letter. Due to a curse, Brahmastra cannot be used against those more skilled than him, though such individuals are rare. To use Vasavi Shakti, he has to sacrifice his armor which weakens him in the process.

Kavacha and Kundala: O' Sun, Become Armor: A divine set of golden armor, and a single golden earring, given to Karna by his mother, Kunti, as proof of his divine heritage. While he gave up the armor in life, he has it when summoned as a Servant, as he was born with it integrated into his body. It acts as a powerful defensive Noble Phantasm that even Gods with their Authorities find it difficult to destroy. As light itself given shape, it grants protection against all types of attacks, including conceptual ones. As long as his armor is active, it will reduce all damage dealt to Karna by 90%, rendering attacks from opponents on his level useless, as they only leave scratches that will quickly be healed by his link with his Master. When Karna is stabbed by a spear, if it was going to go straight through him, it would instead only go slightly in. Due to its nature as light given shape, it's able to protect Karna from the Moon Cell's powers, as the Sun has a conceptual advantage over the Moon. However, it offers no protection against attacks that directly harm his internal organs without interacting with his armor. As it is extremely powerful and continuously active, it greatly adds to his upkeep cost.

Brahmastra: O' Brahma, Cover the Earth: A Noble Phantasm granted to Karna by Parashurama, the sixth avatar of Vishnu. It takes the form of a bow when he is summoned under Archer-class, but appears in other forms in other classes, such as his lance, and he can even use his intimidating stare with his normally covered right eye to fire it as a beam. Utilized by calling upon Brahma, it pursues his opponent across a great range, surely striking regardless of the distance, but due to a curse, he cannot use it against those who have greater ability than he does.

Vasavi Shakti: O' Sun, Abide to Death: A divine spear of mortality made of lightning that was given to Karna by the thunder god Indra as compensation for taking Kavacha and Kundala. While it's even able to kill the Gods, it can only be used once and due to having received the spear as compensation for giving up his golden armor, its usage is tied to Karna permanently dismantling, tearing up and discarding the armor. While he still possesses it before he sacrifices his armor, he cannot release its True Name so its limited to simply being a powerful armament, that allows him to manipulate lightning. As well as utilize his incredible spear technique to unleash A-rank attacks with every swing or thrust he makes. After sacrificing his golden armor, the pieces of it gets fused with the spear, changing its form before unleashing its true power as a divine spear capable of annihilating anything in a single strike, whether they be Gods, Divine Spirits, Heroic Spirits, Phantasmal Beasts, or Bounded Fields. Once fired, the attack takes the form of either a beam of fire or a bolt of lightning, depending on which version Karna chooses. In addition to being EX Anti-Divine Noble Phantasm, it can also function as an A++ Anti-Army Noble Phantasm with massively greater range.

Magic Resistance: An innate ability that grants protection against magical effects. Unlike the Resistance effect that merely rejects Magical Energy, this ability cancels the spells altogether. Karna's Magic Resistance is C-rank, canceling spells with a chant below two verses, but it cannot defend against High-Thaumaturgy and Greater Rituals. In the Moon Cell during the events of Fate/Extella, he instead possesses A-rank Magic Resistance, which can negate all spells A-rank and below, even High-Thaumaturgy, making him essentially untouchable to modern magi and deflecting spells from the Age of Gods that would annihilate the bodies of other Servants. Regardless of his rank, his armor negates most spells on its own through its conceptual defenses.

Karna in Fate/Extra CCC, as "Launcher" 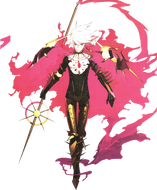 Karna in Fate/Extella
Add a photo to this gallery

Start a Discussion Discussions about Lancer of Red (Karna)