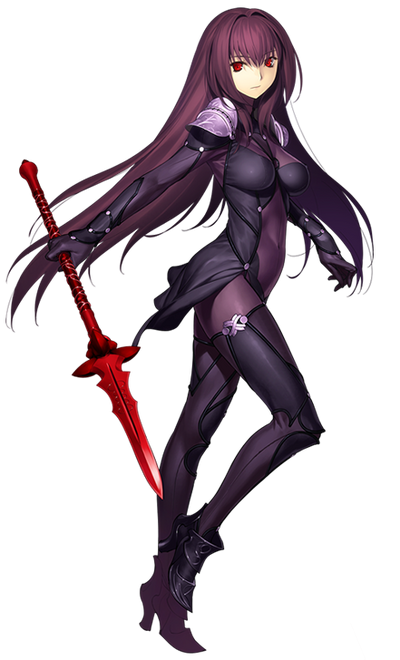 Lancer is one of the Servants able to be summoned Ritsuka Fujimaru in the Grand Orders of Fate/Grand Order.

Her True Name is Scáthach, a Scottish warrior-queen of the Irish Ulster Cycle. She is the queen and gatekeeper of the Land of Shadows, a realm of the dead teeming with ghosts, and only she possesses the skill and power to manage it and take control over the gate itself to keep the dead within. She is the mentor of many heroes, most famously Cú Chulainn, teaching him all his skills and even giving him his famous cursed spear.

Throughout her constant battles, Scáthach surpassed humanity and became half-Divine Spirit, reaching an immortal existence that was cursed to never die. By the time Cú Chulainn finally received Gáe Bolg, she had already become immortal and thus lost her chance to die at the hands of a great warrior. She saw her students off, and saw her pupil's final moments, going on to train his son, Connla. Eventually, the Land of Shadows broke off from the mortal world and fully became a land of the dead, and Scáthach remained there until modern times, incapable of dying until the World itself finally disappeared with the use of Ars Almadel Salomonis.

Tier: 6-C. Higher with another Saint Graph. 6-A with Gáe Bolg Alternative

Name: Lancer, Scáthach, "Witch of Dun Scaith", "Queen of the Land of Shadows"

Powers and Abilities: Superhuman Physical Characteristics, Enhanced Senses, Mastery of many weapons and martial arts, Rune Magic (Allows for Forcefield Creation, Elemental Manipulation, Healing, Clairvoyance, Magic Resistance and temporary boosts to her Noble Phantasms and parameters), Possession, can use essentially any skill with high proficiency, giving her abilities such as Precognition (With A-rank Clairvoyance, one can see into the future, and potentially even read minds), Damage Boost (Deals bonus damage against Divine Spirits, Wraiths, and Servants with Divinity or one who has divine ties), Regeneration Negation with Gáe Bolg, Spatial Manipulation (Can tie down space to trap opponents, preventing them from dodging Gáe Bolg Alternative), Summoning (Can summon other Lancer-class Servants using the Holy Grail, along with multiple copies of Gáe Bolg Alternative), Energy Absorption, BFR, Sealing, and Death Inducement with Gate of Skye (Sucks all lifeforms in range into the Land of Shadows, instantly killing them, and drains their mana if they manage to survive), Information Manipulation (Altered her own Saint Graph and those of the other swimsuit Servants), Soul Manipulation (She can manipulate Saint Graphs), Immortality (Types 1, 3 and 8, Will not age or die until the Land of Shadows is completely destroyed, which only occurred after it was wiped out along with the rest of the World by Ars Almadel Salomonis), Regeneration (At least Low-Mid; able to regenerate after she had 90% of her organs destroyed by Cú Alter), Resistance to Reality Warping (The Holy Grail has no power over her), and Disease Manipulation (Due to being close to a Divine Spirit, illness has lost meaning to her), Servant Physiology

Attack Potency: Island level (On par with Arjuna and intercepted his attacks. Could stalemate Altera. In E Pluribus Unum, she fought Cú Alter though she eventually lost and was heavily wounded). Higher with another Saint Graph (She's managed to kill several minor Divine Spirits on her own, and possesses a form with a higher Saint Graph that far exceeds her normal power. Took on twenty Knights of the Red Branch, including Cu Chulainn and Fergus mac Róich but only narrowly "lost", quickly swatting them aside like sheets of paper afterwards). Continent level with Gáe Bolg Alternative (Matched Cú Alter's Gáe Bolg, which Mash wasn't sure she could block with Lord Chaldeas). Ignores conventional durability with Gate of Skye

Speed: Massively Hypersonic (Boasts an A rank agility, and was able to intercept Arjuna's arrow)

Durability: Island level (Has A-rank endurance, as such she should be comparable to Heracles and King Arthur at her peak). Higher with another Saint Graph and with runic barriers (Should at least be comparable to Cú Chullain's, which can block a great Noble Phantasm).

Stamina: Very high. Other Servants can fight for nearly an entire day without stopping. After losing 90% of her organs and being nearly ripped to pieces by Cú Alter, Scáthach was still able to use the Gate of Skye to escape and tend to her own injuries.

Range: Extended melee range, further with magecraft, Tens of Kilometers by throwing Gáe Bolg Alternative (Her throwing range should be comparable to Cú's, who can throw Gáe Bolg forty kilometers).

Intelligence: Scáthach was the queen of the Land of Shadows, mentor of many warriors such as Cú Chulainn and has lived through a long time, acquiring the wisdom of the abyss, as a consequence of surpassing humanity, killing people, wraiths, and gods. She is particularly notable in that her Wisdom of the Haunted Grounds skill allows her to use practically any skill that isn't unique to a particular hero, allowing her to use a variety of skills and techniques from across history to overwhelm her foes and can see the future through Clairvoyance. She is also extremely knowledgeable in the use of magecraft, said to be as great of a magi as she is a warrior, and the original version of her managed to tap into the Holy Grail to summon Servants of her own.

Weaknesses: Scáthach's many years of experience have made her somewhat arrogant. She desires to die in combat, preferably at the hands of her favored pupil, and will prolong battles with life-or-death stakes to properly enjoy them.

Gáe Bolg Alternative: Soaring Spear of Piercing Death: A set of weapons similar to Gáe Bolg, though one-step older. Similarly to the better-known model, it inhibits regeneration, making it difficult to heal from wounds it inflicts. Although one can save themselves through external means of healing, the wound will not heal completely until Scáthach's death. When it's true name is activated it combines the two functions of Cu Chulainn's Noble Phantasm, the "Barbed Spear that Pierces with Death" and the "Soaring Spear that Strikes with Death". First, a close ranged attack from the first spear locks the target in the air by sewing space, then the second spear is thrown to destroy the target, which is said to be able to pierce through anything if thrown with all her might.

Gate of Skye: Gate to the Magical Realm Brimming with Death: Scáthach summons a massive gate to her world, the Land of Shadows, that sucks in all lifeforms within its range through the gate. Scáthach has control over who is targeted for this, and those who are unable to resist through their Mana or Luck are sucked into the gate and instantly killed. Even if they resist its effects and survive, it heavily drains their mana and damages them. Alternatively, Scáthach can escape through the Gate of Skye if cornered.

Magic Resistance: An innate ability that grants protection against magical effects. Unlike the Resistance effect that merely rejects Magical Energy, this ability cancels the spells altogether. Scáthach's Magic Resistance negates all spells A-rank or below, even High-Thaumaturgy, making her effectively untouchable to modern magi.

Wisdom of the Haunted Ground: A vast intellect gained through surpassing the existence of humans while killing gods and being left outside of the World. Scáthach's A+ rank in this skill allows her to use nearly any other skill, save for the unique skills of other heroes, with a high proficiency of B~A rank, on top of allowing her to teach these skills to those she acknowledges as true heroes. During combat, she often uses Clairvoyance to read the future, predicting the future with such accuracy that she was able to predict the circumstances of Cú Chulainn's death. 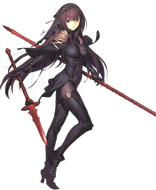 Scáthach in Fate/Extella
Add a photo to this gallery