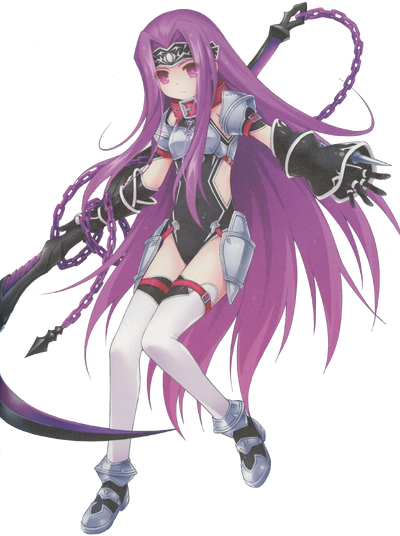 Lancer is a Lancer-class Servant able to be summoned by Ritsuka Fujimaru in the Grand Orders. She first appears in the Babylonia singularity as Anna, having been summoned despite her divinity to face her elder self. She also appears in First Order as an adult, altered by the mud of a corrupted Grail.

Her true name is Medusa, having been summoned in her younger aspect, when she was closer in nature to her elder sisters as a perfect goddess born from humanity's wishes for ideal, eternal idols. However, while her sisters were innocent beings incapable of surviving on their own, even from an early age, Medusa's predisposition towards slaughter shows through in her protection of her siblings.

Tier: 6-C. Higher with Caress of the Medusa

Powers and Abilities: Superhuman Physical Characteristics, Enhanced Senses, Limited Power Nullification, Skilled Scythe Wielder, Mind Manipulation (Can charm others with her voice), Petrification with Cybele, Statistics Amplification (Can increase her physical strength with her Monstrous Strength skill), Immortality/Regeneration Negation with Harpe (Through Harpe's "Refraction of Longevity", she can inflict wounds that can only be healed in accordance with natural laws and nullifies the "undying attribute" of immortals) and Servant Physiology

Attack Potency: Island level (While younger and admittedly weaker, she should be somewhat comparable to her older counterpart. Fought against and held off Jaguar Man herself, and helped defeat and restrain Ishtar). Higher with Caress of the Medusa (A B-rank Noble Phantasm, the same rank as Phoebus Catastrophe, making it superior in firepower to A-rank Strength). Caress of the Medusa also ignores conventional durability (Using Cybele, Medusa instantly petrifies her opponent at the end of her Noble Phantasm).

Speed: Massively Hypersonic (Possesses the same rank in Agility as her elder self and can fight against other Servants).

Range: Extended melee range to tens of meters with Harpe, further with Cybele.

Intelligence: Despite her young age, Anna is wise and skilled beyond her years, having been born with the ability to fight and protect her sisters. In combat, she wields Harpe with deadly skill, using it to great effect in her battles against Ishtar and Gorgon in Babylonia.

Immortal Slaying Scythe, Harpe: The divine sword utilized by the hero Perseus to slay the gorgon Medusa, granted to him by Hermes and wielded by Medusa in this form thanks to their association. It isn't a particularly powerful sword on its own, but it possesses the special trait "Refraction of Longevity", meaning that any wounds dealt by the blade can only be healed in accordance with natural laws and bypass the undying attribute of immortals.

Caress of the Medusa: Embrace of the Goddess: Medusa's primary Noble Phantasm, which materializes the abilities she will gain as an adult in the future in the form of a lethal attack, beginning with a flurry of slashes from Harpe. After this, Medusa activates her Mystic Eyes, Cybele, to instantly petrify every opponent in her line of sight.

Magic Resistance: An innate ability that grants protection against magical effects. Unlike the Resistance effect that merely rejects Magical Energy, this ability cancels the spells altogether. Thanks to her nature as a goddess and future monster, Medusa possesses a high rank of B+ Magic Resistance, which allows her to negate spells with chants below three verses, making it difficult even for Greater Rituals and High-Thaumaturgy to affect her, even allowing her to completely cancel spells of the latter depending on the situation.

Affections Towards the Beyond: The feelings that Medusa has towards the brightest, most beloved days of her life, which drives her forward through all suffering and misfortune.

Alluring Nightingale: A skill possessed by those with naturally beautiful voices, which they can use to charm others as a declaration of their position of authority. This makes Medusa's words alluring, allowing her to easily charm others, but it can be negated by Magic Resistance or resisted by those with a strong enough will.

Goddess' Divine Core: The divinity of an existence designated as a perfect goddess at the moment they were born, granting Medusa the effects of the Divinity skill, allowing her to reduce "Anti-Purge defense" in proportion to its rank, allowing her to break through defensive abilities such as Achilles' Andreas Amantos. It also grants her absoluteness of her body and mind, repelling mental interference and prevents her body from growing any older or changing in shape due to caloric intake.

Monstrous Strength: An ability possessed by monsters and beasts that allows Medusa to increase her physical strength beyond the norm, giving her an edge in combat. Thanks to her younger age and less monstrous nature, Medusa's rank in this skill is lower than that of her adult's self, being at a mere E rank to that of her older selves B and A ranks respectively.

Medusa's Formal Dress
Add a photo to this gallery

Retrieved from "https://vsbattles.fandom.com/wiki/Lancer_(Medusa)?oldid=5720992"
Community content is available under CC-BY-SA unless otherwise noted.