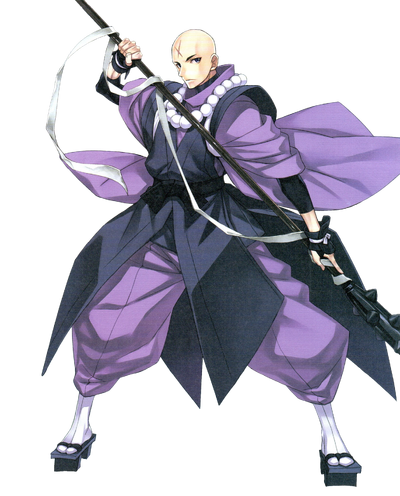 Lancer is a Lancer-class Servant able to be summoned by Ritsuka Fujimaru in the Grand Orders of Fate/Grand Order first appearing in the Shimosa Subspecies Parallel World during the events of Epic of Remnant as an ally before being turned into “Lancer Purgatorio”.

Eventually, he adopted the name Hōzōin Inshun following his taking of the mantle as the new master, going on to further perfect the style that reached the realm of the Gods and Buddhas even after his predecessor instructed him to abandon it.

Powers and Abilities: Superhuman Physical Characteristics, Master Spearman (His skill with the spear in life was such that it was praised for being able to reach the Gods and Buddhas), Supernatural Luck, Minor Fate Manipulation (Servants with B-rank Luck or higher can change their own fates to evade inevitable outcomes such as having their hearts destroyed by Gáe Bolg), Knowledge of Respect and Harmony makes his attacks "unreadable" and prevents his opponents from ever analyzing or getting used to his attacks, Limited Power Nullification and Servant Physiology | All previous abilities, in addition to superior Regeneration (At least High-Mid, likely Low-High. Stated he could come back if just one of his fingers remained, and the only way Musashi could stop him for good would be if she didn't leave a single speck of him behind.), Reality Warping, Soul Manipulation (They can all summon a dueling arena in a manner compared to Reality Marbles, where the loser will have their soul consumed.), Invisibility (They are all capable of concealing their presence in a manner similar to Presence Concealment.), Aura and Fear Manipulation (They all possess a evil ki that can induce fear in the people around them)

Attack Potency: Island level (Capable of delivering blows that can kill average Servants in a single hit, crushed the heart of Saber Empireo) | Island level (Stronger than before. Would have killed Musashi had his skills not dull)

Lifting Strength: At least Superhuman (Even the weakest Servants are stronger than the finest athletes)

Stamina: High (Servants can fight for an entire day without tiring and continue fighting for as long as they have a source of mana)

Intelligence: Known as the greatest wielder of the cruciform spear, whose skill was said to have reached the Gods and Buddhas, Inshun is a nearly unparalleled master of the spear, with the only ones said to be his equal being Takada Matabei and his master, Hōzōin In’ei. His technique is said to be so flawless, that Musashi admitted that she wouldn't have won against him had his skills not been dulled by his transformation into Lancer Purgatorio, even adding that she estimated that she would have lost 31 times out of 32 battles despite his skills being dulled although that was before she reached nothingness and grasped Zero. In addition, he was able to duel and crush the heart of Saber Empireo, a Sword Saint who reached the equivalent of the mental state Nothingness.

Weaknesses: He cannot fight in Spirit Form. Inshun admits that he has trouble facing multiple opponents at once. His ability to strike first will not occur if his enemy doesn't want to attack him. | His maddening has dulled his precision and skills somewhat.

Inshun's Cruciform Spear
Add a photo to this gallery