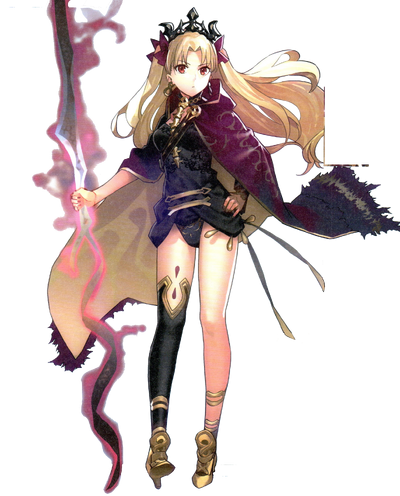 Lancer is a Lancer-class Servant able to be summoned by Ritsuka Fujimaru in the Grand Orders, first appearing in the Babylonia singularity as both a foe and an ally.

Lancer's True Name is Ereshkigal, the Babylonian goddess of the Underworld in Sumerian myth and the sister of Ishtar, who she also shares the same status as a pseudo servant due in part of sharing the same body that her sister is summoned into, Rin Tohsaka. Having carried out her duties of administering the underworld since birth as it’s ruler, she was a goddess that once lived in the Age of the Gods, only to disappear along with it without ever knowing of the world above her domain, or of that of freedom.

Attack Potency: Island level (Possess A-rank strength, putting her above her sister and making her comparable to Berserker and Saber at her peak). Large Island level with Kur Kigal Irkalla (Its firepower is comparable to, if weaker than, An Gal Tā Kigal Shē)

Speed: Massively Hypersonic (Can keep up with other Servants)

Lifting Strength: At least Superhuman (Even the weakest Servants are stronger than the finest athletes)

Standard Equipment: Her spear, the blazing soul of Meslamtea.

Intelligence: Having been in charge of administering and managing the underworld during the age of the Gods due to having the knowledge to do such task since birth, Ereshkigal is a responsible and diligent goddess as well as a capable servant. Whereas Ishtar was known for her reckless and destructive rebukes and actions, including having made Gilgamesh her sworn enemy out of the sheer fact he rejected her, Ereshkigal is a level-headed and reasonable figure of her status if gloomy due to having not gone beyond the world above in her time. As a Servant, she is capable enough to fight alongside other Divine Servants like her sister despite her powers having dropped while possessing a human container.

Weaknesses: Ereshkigal cannot fight while in spirit form, and can only use her Authority in the Underworld. In addition, as a Servant, she cannot utilize this Authority without injuring and straining herself.

Authority: As a God, Ereshkigal possesses Authorities, special powers distinct from Code Casts, Noble Phantasms, and Skills in that while they achieve results based on some logical process or principle, an Authority realizes a result simply because the user has the right to do so. Authorities are powers on the level of world construction, and can be powers such as event shifting, time manipulation, causality manipulation, manipulation of concepts they embody, kingdom-building and other powers on that level. The Gods originally used their Authorities during the Age of Gods to shape the world, build kingdoms and advance civilization. But as time went, humanity advanced to the point that Authorities became unnecessary. When summoned as a Servant, Ereshkigal cannot utilize her Authorities without harming and straining herself, and her Authority is weaker outside the Underworld.

Kur Kigal Irkalla: The Bellows of Kur that Tramples upon Ekur: The Noble Phantasm of the goddess of the Underworld. This is the same as her sister’s An Gal Tā Kigal Shē, but rather than being a “shot from the heavens to the great earth below”, it functions as the goddesses “punishment from the great below to the world above”. Though it may fall short to Ishtar’s in terms of firepower, the true nature and purpose of Kura Kigal Irkalla is to change up the battlefield to that of the Underworld.

Ereshkigal does this by twirling her spear around rapidly while energy and lightning is gathered up before slamming it down to the ground and summoning a torrent of blue flames towards her enemies, where she then changes the surrounding area to that of her Underworld and proceeding to summon numerous pillars of red energy to destroy her enemies. Due to also having changed it to the underworld where her Authority as a goddess is the highest, Ereshkigal Protection of the Underworld skill will also become active, providing her and any allies fighting alongside her to be granted with a powerful blessing and likely also increase the effects of her Noble Phantasm. In this domain, the gods and the spirits of the dead cannot defy her authority, and she easily defeats the likes of Quetzalcoatl within the confines of Kur.

Naamu Abzu Gugalanna: Ereshkigal surges mana into her spear, making grow larger than even her giant ghost avatar and glow blood red. She then stabs the spear into her foe, unleashing a massive explosion once the spear reaches its target. This Noble Phantasm is powerful enough to breach several layers of Lord Camelot, but it was not able to penetrate it completely.