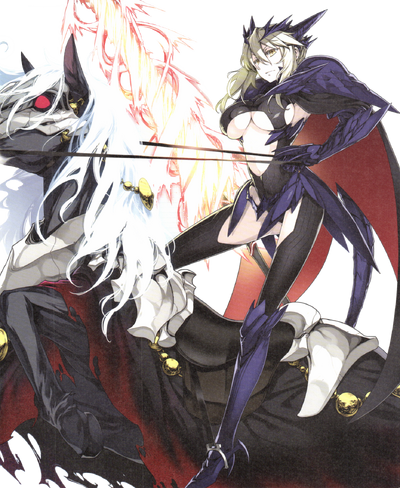 Lancer is a Lancer-class Servant the protagonist can summon during the Grand Orders of Fate/Grand Order and appears as an antagonist during the Londinum Singularity.

Lancer's True Name is Artoria Pendragon (Alter), an alternate possibility borne from the idea that King Arthur wielded the holy lance Rhongomyniad instead of Excalibur as her main weapon. A black tyrant who maintained order in Camelot with a hand firmly gripped around her cursed lance, Artoria was feared by the very people she sought to defend. She believes that it is the duty of a hero to be feared and shunned as a cold-hearted slaughterer as she crushes those that would threaten the peace of her kingdom without a shred of mercy.

Tier: 6-C. Likely 6-A with Rhongomyniad. Much higher with several restraints released

Powers and Abilities: Superhuman Physical Characteristics, Master Lancer, Magic (Can utilize Invisible Air, a Bounded Field, and control her own mana through her Mana Burst skill), Forcefield Creation, Energy Projection, Statistics Amplification (Can reinforce her body with magical energy to increase her strength, speed, and durability), Vehicular Mastery (Can "ride" any vehicle or mount with supernatural skill), Animal Manipulation, Necromancy (As the leader of the Wild Hunt, Artoria is able to control an army of ghosts and take the spirits of others under her command), Air Manipulation (Can release torrents of wind with Invisible Air and Rhongomyniad as the King of Storms), Water Walking, Minor Absorption (Absorbed the remaining magical mist of London when she appeared), likely Resistance to Absorption, Soul Manipulation (Being near her Noble Phantasm causes the collapse of the Spirit Origin, a death that is carved into the soul), Limited Power Nullification and Servant Physiology

Attack Potency: Island level (Boasts A-Rank Strength and should be comparable to her Saber and traditional Lancer counterparts, both of whom were able to kill Mordred with a single thrust of Rhongomyniad, crushing the latter's armor as if it weren't even there). Likely Continent level with Rhongomyniad (As a Divine Construct and a Noble Phantasm of great class, Rhongomyniad's activation should be far superior to any of her normal attacks even with only a single restraint released. Likely comparable to traditional counterpart). Much higher with over half of Rhongomyniad's restraints released (With at least half of its Restraints released, it can show its true power as an anchor that fastens together the outer layer of the world and the Reverse Side of the World. If it were to be undone, reality will be stripped from the surface of the World, leaving only the Reverse Side of the World and bringing back the Age of Gods)

Speed: Massively Hypersonic (Is a Heroic Spirit of great class, clashed with Mordred and Mashu Kyrielight at Londinum shortly after they battled Nikola Tesla, whose own summoning in the Singularity was scaled as great class and was empowered by both the grail and demonic fog. Should be comparable to both her Saber and traditional Lancer counterparts)

Lifting Strength: Class 25 via power-scaling (Should be no weaker than her Saber counterpart, who can easily flip a trailer truck)

Stamina: High. (Other Servants can fight for nearly an entire day without stopping, and in Garden of Avalon, her living counterpart was able to fight against Vortigern for several hours straight even after Excalibur's light was swallowed and many of her knights were keeling over from exhaustion.)

Standard Equipment: Her armor, materialized through her own power, Rhongomyniad, and her horse, Llamrei.

Intelligence: A tyrannical version of Artoria's Lancer's counterpart, Artoria Alter is ruthless on the battlefield, mowing down her foes with overwhelming force without a trace of hesitation or mercy. A hero of incredible power, even the proud Mordred admitted that Artoria would simply blast her away over ninety percent of the time. As the King of Knights, Artoria is a masterful jouster whose ability to fight on horseback surpasses any human alive, using the most brutal and pragmatic methods of crushing her foes underfoot.

Weaknesses: Artoria lacks her Saber counterpart's Instinct, along with Avalon. Rhongomyniad's activation is limited by the Thirteen Constraints of the Round Table, at least half of which must be released to showcase its full power.

Rhongomyniad: The Spear That Shines To The Ends Of The Earth: King Arthur's holy lance and Artoria's primary Noble Phantasm, it is a twisted, thorned version of the original weapon that reflects the inhuman countenance. Like its original counterpart, it is a Divine Construct that is a mere "shadow" of the true Rhongomyniad, an anchor of light that stitches together reality to the Reverse Side of the World. Should more than half of its thirteen restraints be released, reality would be torn from the surface of the Earth, bringing back the age of fantasy and magic, effectively reinstating the Age of Gods. The known restraints are:

However, this version of Artoria has never released more than half of Rhongomyniad's restraints. But releasing even a single restraint to unleash a partial invocation of this Noble Phantasm's True Name can showcase incredible power befitting a Divine Construct. Differing from her traditional Lancer's usage of the Noble Phantasm as a holy strike from above, Artoria instead allows Rhongomyniad to rapidly spin, gathering a blackened storm of wind, lightning, and mana that she unleashes upon her foes.