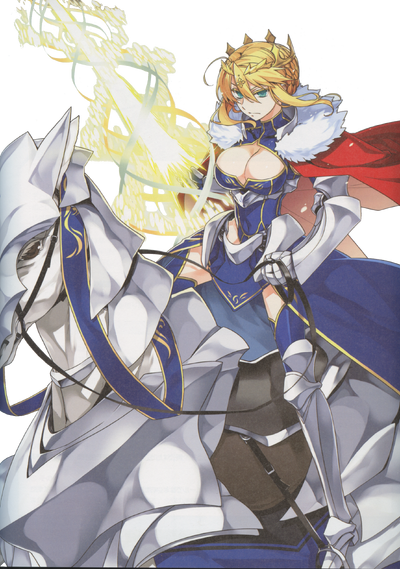 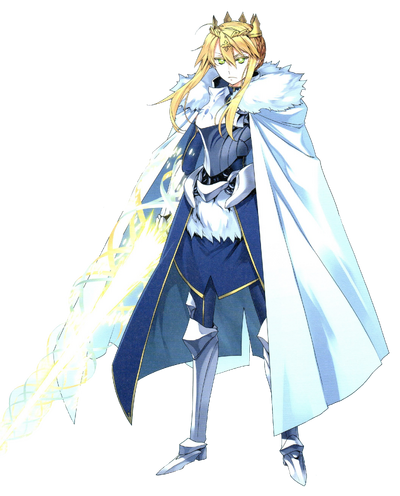 Her true name is Artoria Pendragon, better known as King Arthur, the "Once and Future King" and a legendary hero of Britain. She became king by pulling the sword Caliburn from the stone. While she is most popularly known as the wielder of Excalibur, the strongest holy sword, this Artoria instead originates from a possibility where the holy lance Rhongomyniad was instead her main weapon. As a result, she is no longer a pure Heroic Spirit, as she has become an existence closer to that of a Divine Spirit.

Another Artoria wielding Rhongomyniad, the Lion King, appears during the Sixth Singularity, Camelot. She is from a history in which Bedivere never returned Excalibur to the Lady of the Lake, preventing Artoria from passing on. As a result, Rhongomyniad has changed her greatly, completely transforming her into a Divine Spirit, the Goddess Rhongomyniad.

Attack Potency: Island level (Should be comparable to her incarnation as a Saber. Killed Mordred with a single blow). Higher with Rhongomyniad (Should be considerably more powerful than her normal blows even when only one Restraint is released), Continent level with several Restraints released (Killed Vortigern, who had completely absorbed both Excalibur Galatine's light and most of Excalibur's, and had become a dragon embodying all of Britain), much higher with half of its Restraints released (With at least half of its Restraints released, it can show its true power as an anchor that fastens together the outer layer of the world and the Reverse Side of the World. If it were to be undone, reality will be stripped from the surface of the World, leaving only the Reverse Side of the World and bringing back the Age of Gods) | Large Island level (Almost killed Gawain with a casual attack. Her attacks on villages yield this much energy), Continent level with Rhongomyniad (Can match Ozymandias' Dendera Light Bulb)

Speed: Massively Hypersonic (Comparable in speed to her regular incarnation as a Saber, along with other Servants. Can jump up above the clouds to use Rhongomyniad)

Lifting Strength: Class 25+ via power-scaling (Should be no weaker than her Saber counterpart, who can easily flip a trailer truck)

Stamina: High (Other Servants can fight for nearly an entire day without stopping, and in Garden of Avalon, she was able to fight against Vortigern for several hours straight)

Standard Equipment: Her armor, materialized through her power, Rhongomyniad, and her horse, Dun Stallion

Intelligence: Artoria's mentality is known to not be much different than her mainstream counterpart, being a prodigious king who led Britain to prosperity despite the many difficult decisions she had to make but relied more on her reasoning rather than her Instinct. On the other hand, her counterpart, the Goddess of Rhongomyniad, is much more of a tyrant than even her Alter form is, mercilessly executing those who would go against her as she massacres her citizens to try and save Britain from Solomon.

Weaknesses: Artoria lacks her Saber counterpart's Instinct, along with Avalon. Rhongomyniad's activation is limited by the Thirteen Constraints of the Round Table, at least half of which must be released to showcase its full power. | The Goddess of Rhongomyniad's immortality is linked to the spear, so, without it, she will eventually vanish.

Rhongomyniad: The Spear That Shines To The Ends Of The Earth: The holy lance of King Arthur, a blessed spear regarded in the same light as the holy spear Longinus, that which pierced the Messiah. As a weapon, it is incredibly powerful, capable of instantly punching through Mordred's armor to kill her in a single blow, as if there was nothing in its way at all. But its true power lies in its activation. The holy spear itself is only a shadow of the true Rhongomyniad, a tower of light that fastens the outer layer of the World and the Reverse Side of the World beneath it in place. Were this anchor to be undone, it would result in "reality" being torn from the surface of the World, revealing the Reverse Side of the World underneath it and reinstating the Age of Gods. For this reason, Rhongomyniad is regarded as the "spear of the end".

Much like Excalibur Proto, Rhongomyniad's true power is restricted by the Thirteen Restraints of the Round Table. Its true power only shows when half of the seals are released, showcasing the brilliance that exists at the Ends of the Earth. Without half of its Restraints released, it only showcases a tiny fragment of its true power, but even this has great power. The Restraints that are known thus far are:

Magic Resistance: An innate ability that grants protection against magical effects. Unlike the Resistance effect that merely rejects Magical Energy, this ability cancels the spells altogether. Due to her class, Artoria's Magic Resistance is lowered from a stellar A-rank to B-rank, though this is still enough to nullify spells with a chant below three verses, and makes it difficult for even High-Thaumaturgy and Greater Rituals to affect her.

Riding: The ability to ride mounts. Artoria's skill and experiences as a knight mean that she has ridden horses throughout all of her life, and summoned as a Servant, she rides the Dun Stallion so that she can use the full power of Rhongomyniad as a lance. With a rank of A, she can ride all vehicles and nearly all other animals with perfect control and speed that far surpasses human capabilities, though she cannot ride Phantasmal or Divine Beasts.

Blessings from the End of the World: A blessing is automatically given to those who wield Rhongomyniad, ranking up all their parameters save for Mana and Luck during battle.

Charisma: The natural talent to command an army, which increases the ability of allies during group battles. It is said that a rank of B in this skill is sufficient to lead a nation as its King. Having once ruled Britain in a time where it was exposed to attacks by foreign enemies and having repelled them in turn, Artoria possesses such a high rank in this skill.

Mana Burst: A skill that allows for an increase in performance by infusing one's weapons and body with magical energy, for both defensive and offensive purposes, effectively recreating the effects of a jet burst. As a Lancer, Artoria uses this ability as she did when she was a Saber, using it to propel herself across the battlefield at high speeds while reinforcing her entire body with magical energy. With A-rank, even a stick can become a great weapon. 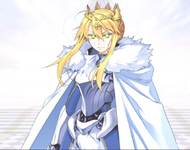 The Lion King
Add a photo to this gallery