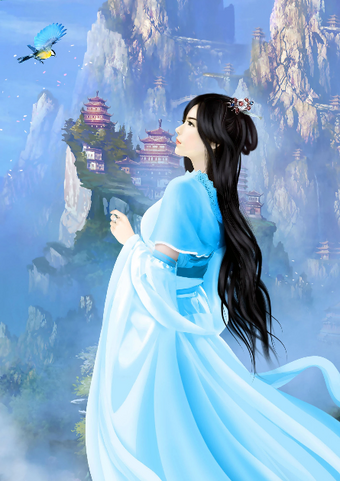 Lan Yunzhu was the prime descendant of the Thousand Carp River, one of the human Imperial Lineages of the Sacred Nether World.

She became engaged to Li Qiye and followed him into the Prime Ominous Grave, where he gave her many treasures. When the human race was about to be wiped out from the continent, she fought against an ancestor and helped stall the army of ghosts until Li Qiye could arrive and save them.

Tier: 4-A, higher with the Cyclical River of Fate. 3-B with the Night Era Flower

Attack Potency: Multi-Solar System level (Should be able to kill Heavenly Sovereigns. People at the level of cultivation have been shown to survive attacks that could destroy stars as a mere side-effect/shockwave), higher with the Cyclical River of Fate. Likely Multi-Galaxy level with the Night Era Flower (Can overwhelm a Virtuous Paragon with his True Fate Weapon. Paragons at that level have been shown to destroy galaxies)

Intelligence: Likely Genius. Is one of the most powerful Cultivators of her generation, and could possibly fight for the title of Immortal Emperor, meaning that she could possibly create a Dao to get the approval of even the Heaven's Will.

Weaknesses: She can only reverse time 3 or 4 times with her Shuttle, due to the vast blood energy it requires.

Retrieved from "https://vsbattles.fandom.com/wiki/Lan_Yunzhu?oldid=6261144"
Community content is available under CC-BY-SA unless otherwise noted.