Lan Fan (ランファン, Ranfan) is a retainer of the Xing Empire's Yao Clan, a personal bodyguard of Prince Ling Yao and the grandchild of Ling's senior bodyguard, Fu. Fiercely loyal to her prince, Lan Fan's devotion to Ling borders on romantic infatuation, as insults to his name cause her to fly into a rage (overwhelming her better judgment and dulling her usually sharp combat abilities) and she becomes flustered when unmasked in his presence. 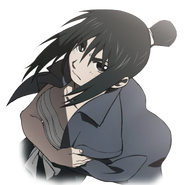 Retrieved from "https://vsbattles.fandom.com/wiki/Lan_Fan?oldid=6156565"
Community content is available under CC-BY-SA unless otherwise noted.