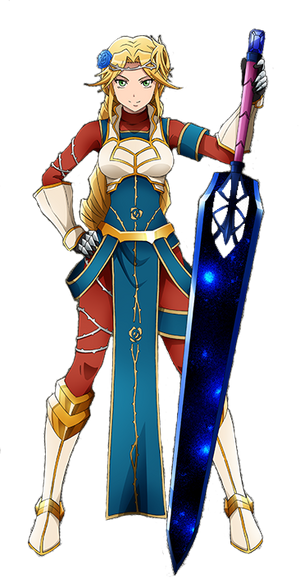 Lakyus Alvein Dale Aindra is an adamantite-ranked adventurer and the leader of the Blue Roses adventurer team. She is a faith-based magic caster and a warrior priestess. She is first seen investigating the activities of the Eight Fingers alongside the Golden Princess, Renner. Later, she resurrects three of her teammates after they were killed by Jaldabaoth, proceeding to assist them in regaining the strength they lost from the resurrection process. Soon afterwards, she joins Momon and Evileye in the first battle against Jaldabaoth and his army of demons.

Attack Potency: Building level (As a high-ranking adamantine adventurer and leader of the Blue Roses, she should surpass Gagaran in power, who herself is well above the likes of Zaryusu in strength. Capable of casting 5th Tier magic, and could kill groups of demons that couldn't be damaged by lesser adventurers), Large Building level with Dark Blade Mega Impact (Atomized five demons)

Speed: At least Supersonic (Comparable to characters who can produce sonic booms while moving, such as Brain Unglaus. The Cloak of Rat speed further increases her movement speed and reflexes)

Durability: Building level (Should be capable of taking attacks from other high-ranking adventurers), possibly higher

Stamina: High. Fought extensively against the hordes of demons summoned by Demiurge disguised as Jaldaboath

Intelligence: Gifted. A skilled combatant and leader extremely capable for her young age, having reached Adamantite far sooner than most of the privileged few adventurers who do.