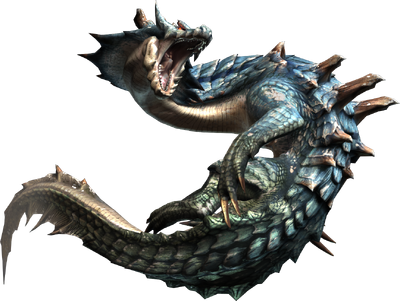 Lagiacrus are a variety of Leviathan introduced in Monster Hunter 3. They are feared by sailors as the "Lords of the Seas" and are the apex predators of their aquatic environment.

In-Game Description: Leviathans that exist at the top of the aquatic food chain. Feared by sailors as the "Lords of the Seas", Lagiacrus store enough electricity in their spinal organs to make the oceans surge. Occasionally they can be found resting on land as well.

Attack Potency: City Block level (Comparable to other large monsters like Giadrome, who can freeze other monsters) | Small Country level+ (Should be comparable to Kushala Daora who dispersed a snowstorm)

Durability: City Block level (Comparable to Agnaktor and other large monsters) | At least Island level, likely Small Country level+ (Comparable to other Elder Dragon-level monsters like Rajang who can take hits from Kirin)

Stamina: High (Can fight several opponents for tens of minutes and still be able to fight) 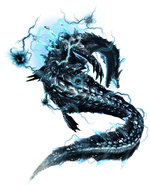 Abyssal Lagiacrus
Add a photo to this gallery