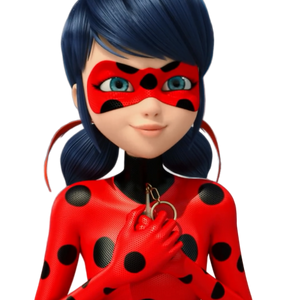 The Ladybug Sentimonster is a Ladybug doppelgänger sentimonster created by Mayura as Cat Noir's dream partner in order to fool him and take his miraculous. Mayura considered her to be the most powerful sentimonster that had ever existed. However, she betrayed her creator to side with the real Ladybug and Cat Noir.

Age: Few Minutes at most (Sentimonsters are living being that are created by the Peacock Miraculous user. She was later killed by Mayura after she betrayed her to side with Ladybug)

Powers and Abilities: Superhuman Physical Characteristics, Expert Hand-to-Hand Combatant, Self-Sustenance (Type 2. Comparable to Feast, who survived more than a century trapped inside lava), Immortality (Type 1, 4 and 6. Comparable to Feast, who survied in a dormant state for 172 years. Can be resurrected after its defeat unless the Amok is purified). As she have all the powers of the real Ladybug, she also should posses all of her powers, which include:Expert Yoyo wielder, Acrobatics, Enhanced Senses, Magical Object Creation (With her Senti-Charm), Adhesive Manipulation (with her sticky rocket launcher she got from her Senti-Charm), Reality Warping, Time Manipulation, Causality Manipulation, Purification (Type 1, 2 and 3), Healing, Power Nullification, Dimensional Storage (With her yo-yo), Social Influencing (Managed to fool Cat Noir into believing her that she is the real Ladybug, and nearly succeeded taking his miraculous), Surface Scaling, Resistance to: Heat Manipulation (Comparable to Feast, who survived falling into lava), Deconstruction (Comparable to Reflektdoll, who resisted Lady Noir's Cataclysm); Resurrection (Sentimonsters can be resurrected after their initial defeat if the amok isn't purified), Duplication, Life Creation (each amok creates a new sentimonster), Corruption and Mind Manipulation (If her Amok isn’t purified after being defeated, it would start to multiply into many more Amoks and infect different persons, creating identical looking sentimonsters for each person infected. The sentimonsters would remain immobile until Mayura Re-Amokizes herself and the main sentimonster is ressurected)

Attack Potency: Town level, likely higher (Was stated by Mayura to be the most powerful and advanced sentimonster she created, making her superior to the Moth Sentimonster. As a Ladybug look-alike, she should be equal to Season 3 Ladybug)

Speed: At least Supersonic+ with FTL combat and reaction speed (Faster than The Mime, kept up with Season 3 Ladybug and Cat Noir)

Lifting Strength: Class G (Should be equal to Season 3 Ladybug)

Striking Strength: Town Class (Should be supeeior to other sentimonsters), likely higher (Comparable to Season 3 Ladybug)

Durability: Town level, likely higher (Should be superior to other sentimonsters, and comparable to Season 3 Ladybug)

Range: Standard Melee range, higher with Senti-Charm gun. At least Tens of kilometers with her yo-yo (comparable to Ladybug's yoyo), likely far higher (The creator and director Thomas Astruc said on Twitter that the length of the yo-yo is "probably infinite")

Weaknesses: Whoever holds the akumatized object can control the Sentimonster. Can be dusted by a snap of the Peacock Miraculous holder. Will cease to exist if Mayura's Eiffel Tower keychain is destroyed, though the Amok inside of it is able to multiply and can resurrect her unless purified

The Ladybug sentimonster will likely attack either physically or with her yo-yo, similarly to the real Ladybug, and can also use her Senti-Charm (her own version of Ladybug's Lucky Charm) to create a magical weapon for her to fight with.

Retrieved from "https://vsbattles.fandom.com/wiki/Ladybug_Sentimonster?oldid=6482850"
Community content is available under CC-BY-SA unless otherwise noted.