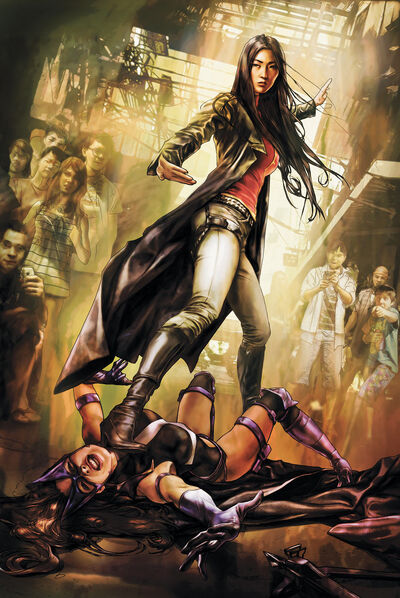 Sandra Wu-San, better known as Lady Shiva, is one of the deadliest assassins in the world and arguably the finest hand-to-hand combatant on Earth. A prodigy in unarmed combat from an early age, tragedies such as the death of her sister Carolyn spurred her to become a ruthless killer in revenge. In time, she forgot her original goal and succumbed to her growing bloodlust, selling her skills to the highest bidder in hopes of finding worthy opponents to fight.

To this end, she bore a child, Cassandra, with the assassin David Cain and trained many of the greatest martial artists in the DC Universe, including Batman and his protégés, Nightwing, Red Hood, and Red Robin. At times, she has even become a pragmatic superhero, joining Oracle's Birds of Prey as a provisional member.

Attack Potency: Building level (Defeated Killer Croc, who had a broken arm, while only using one of her own arms)

Lifting Strength: At least Peak Human (Can pick up and throw humans with extreme ease. Is stronger than Catwoman. Can pin Batman to the ground with ease)

Durability: Building level (Has survived hits and being in prolonged fights with Cassandra Cain. Has tanked strikes from Batman. Has tanked a massive explosion at point blank range)

Stamina: Very High (Can fight even while heavily injured)

Intelligence: Genius in combat. Gifted otherwise (Lady Shiva is arguably the finest hand-to-hand combatant on Earth, with other fearsome combatants like Batman and Nightwing openly admitting their inferiority to her in a fair fight and defeating the former even as a pre-teen. Her innate talent for reading her foes' body language and keen knowledge of the human body allows her to easily predict her opponents' movements and fighting styles with a glance and incapacitate or kill them by shutting down their internal systems with several well-placed blows. Her mastery of virtually every fighting style known to man has allowed her to demolish entire squads of highly-trained combatants single-handedly, with the combined forces of the Gotham Knights headed by Batman and including Shiva's own daughter, Cassandra, proving to be no match for her. However, she is supremely confident in her abilities and rarely resorts to what she considers underhanded tactics, allowing inferior combatants to take her by surprise and underestimating techniques and equipment that were explicitly designed for use against her, easily being beaten back after Prometheus used data files of her own movements to counter her prized techniques.)

Weaknesses: Normal human weaknesses, but has regularly survived situations of which would kill an average human. Shiva is supremely confident in her abilities and constantly seeks a good fight above all.