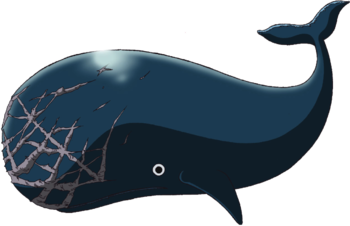 Laboon is an Island Whale native to the West Blue, and a close friend and companion to Brook and the Rumbar Pirates when he was a baby. Due to the dangers of the Grand Line, Laboon was told to stay near Reverse Mountain and promised him that they would come back after two or three years once they've finished their adventure. The Rumbar Piraters were killed during their journey, and Laboon waited for fifty years without knowledge of what their fate was.

Attack Potency: At least Large Building level+ via sheer size (Fought evenly with Luffy, with the latter declaring their fight a stalemate. Can cause damages to Reverse Mountain by repeatedly ramming its head through it)

Range At least hundreds of meters via sheer size

Weaknesses: Multiple injuries on his head, otherwise none notable

Retrieved from "https://vsbattles.fandom.com/wiki/Laboon?oldid=6078757"
Community content is available under CC-BY-SA unless otherwise noted.