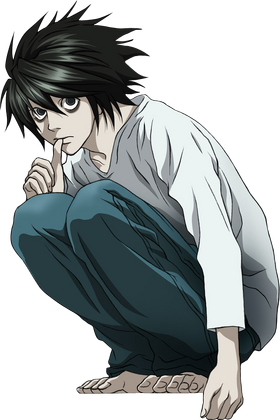 L (エル, Eru) is a world-renowned detective who takes on the challenge of catching the serial killer known only as Kira. In his investigation, L becomes highly suspicious of Light and makes it his goal to prove that he is Kira.

Intelligence: Genius (He is the true identity of the three most famous and influential detectives in the world [Erald Coyle, Deneuve, and himself], and can easily get top marks in all subjects in the prestigious university of Todai.)

Weaknesses: If he sits down normally, his deductive and investigative abilities are decreased by 40%.

Daniel J D’Arby (JoJo's Bizarre Adventure) D’Arby’s profile (The game played was poker, neither had prep time or know a thing about the other)

J. Jonah Jameson (Marvel Comics) Jameson's Profile (Both were 10-A and speed was equalized)