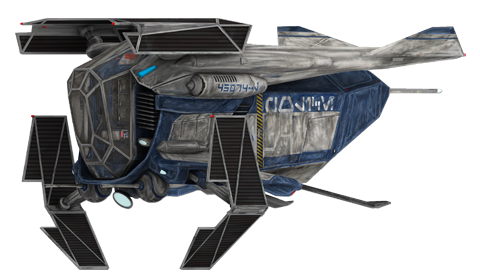 The Republic Patrol Transport, also known as the Republic Police Gunship, was a light gunship introduced during the Clone Wars era. Its primary purpose was to perform law enforcement functions, such as patrol duty and prisoner transport, on Coruscant and other Republic city worlds. Being a light helicopter-gunship type vehicle meant for law enforcement use in dense urban areas, it was less well armed than true military grade gunships so as to reduce the risk on collateral damage.

After the end of the Clone Wars, the Galactic Empire’s military forces adopted a more heavily armed and hyperdrive equipped iteration of this vehicle which came to be known as the Imperial Patrol Transport. It was used more widely by the Imperial Military in various roles. These included patrols of insurgency affected regions, troop and prisoner transport, even as an escort gunship on some capital ships.

Material: Unknown. Possibly incorporates materials like Titanium alloys and Durasteel in the hull, and possibly Quadanium steel in the solar collectors.

Needed prerequisite for use: Trained crew of two (1 pilot and 1 gunner), though one person alone can presumably fly the craft and operate the weapon systems.

Attack Potency: Small Town level with laser cannons (Capable of vaporizing small building sized rock formations). At least Town level+ with missiles (These are unlikely to be strike fighter grade proton torpedoes or concussion missiles. They are more than likely the kind of missiles used in the Hailfire-class droid tank and blast effect missiles used in military grade gunships, and each should be more than capable of destroying something like a Kom'rk-class Fighter or even an AT-TE walker)

Speed: Likely Subsonic+ atmospheric speed (Never specified but likely in the range of 600 to 900 km/hr at least). Can accelerate continuously to Sub-Relativistic+ speeds in space (Likely in the same league as dedicated military transport shuttles). Massively FTL+ travel via hyperspace (Hyperdrive-class never specified, but is most likely a Class 2 or even a Class 1 given how they are seemingly capable of traveling from Son-tuul in the Outer Rim to Skako Minor in the Core Worlds in a relatively short amount of time. Should thus be at least this fast or even faster)

Retrieved from "https://vsbattles.fandom.com/wiki/LAAT/le_Gunship?oldid=4867543"
Community content is available under CC-BY-SA unless otherwise noted.