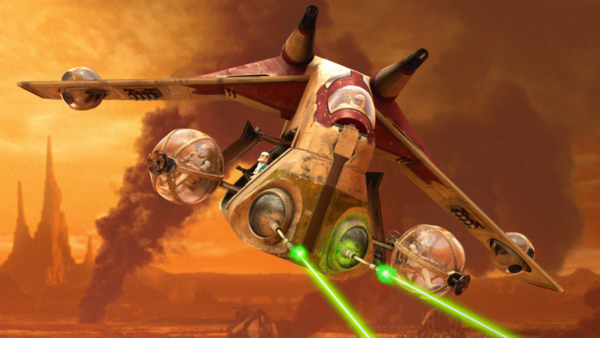 The Low Altitude Assault Transport/infantry (LAAT/i), also known as the Republic Attack Gunship, was a heavily armed variant of the Low Altitude Assault Transport (LAAT) manufactured by Rothana Heavy Engineering for the Grand Army of the Republic and Republic Navy. A common sight throughout the Clone Wars, these fearsome machines would drop dozens of Clone Troopers and even Jedi Commanders and Generals onto Separatist infested battlefields. Specialized LAAT/i with quieter engines and other stealth features were used by Republic Clone Commandos and squads of ARC Troopers to drop in behind enemy lines and conduct surgical strikes. Such stealthy LAAT/i were also often used for rescue operations. After the establishment of the Galactic Empire, the Imperial Navy continued using the standard LAAT/i up till around 14 BBY. After this point, the only other significant usage of the LAAT/i was by the Alliance to Restore the Republic, who made great use of them against imperial garrisons in the Outer Rim.

Tier: 8-C with anti-personnel blaster cannons. 8-B with composite-beam lasers. 8-A with light missiles. High 7-C with mass-driver missiles

Needed prerequisite for use: Trained crew of 2 to 4 (1 pilot, 1 gunner/navigator, 2 additional turret operators). Can carry up to 30 passengers.

Speed: Subsonic+ atmospheric speeds (620+ km/hr). Can accelerate continuously to Massively Hypersonic speeds in space (As witnessed during the battle of Lola Sayu, it can fly from the atmosphere of a planet out to a waiting carrier ship several thousands of kilometers away in orbit in mere moments)

Durability: Small Town level (Is mostly impervious to blaster fire other than from light starfighters and heavy gunships. Can take a couple of hits from the light laser cannons of Vulture droids and Hyena bombers as well as the Nantex-class fighter and still press on)

Range: Up to 2 km with anti-personnel blaster cannons and composite-beam lasers, dozens of kilometers with missiles.

Retrieved from "https://vsbattles.fandom.com/wiki/LAAT/i?oldid=4790528"
Community content is available under CC-BY-SA unless otherwise noted.