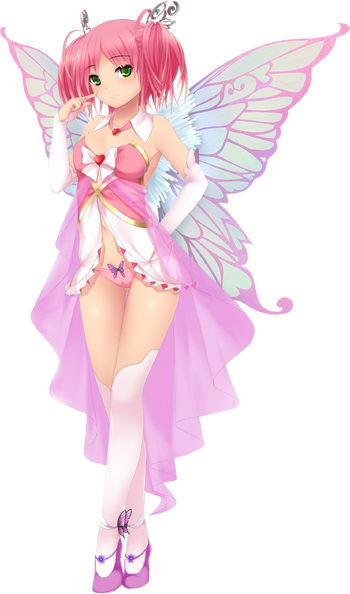 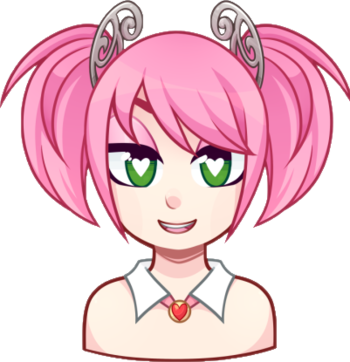 Kyu is often seen as the mascot character for the Huniepop franchise as a whole, appearing in every game so far and revealed to be appearing once again in Huniepop 2 once the game comes out. She also serves as the standard tutorial character and will often teach how to play the game.

Powers and Abilities: Longevity, likely Flight (One of the pictures she sends you shows her flying at what appears to be cloud level), Hair Manipulation (Can change the color of her hair, as done in the beginning of the game), Tracking (Using the Huniebee, she can track the location of females no matter where they are), Invisibility (Can determine who she becomes visible to), possibly Perception Manipulation (Along with being unable to be seen, she is also unable to be heard by those she doesn’t want to hear her), Fourth Wall Awareness (Mentions things such as the soundtrack to the game and the hunger meter, teaches how to play the game and often mentions how it’s a game), Magic (Stated that love fairies possess magic, and has used some herself, but it's unknown what it's capable of), possibly Duplication (her magic made it so the player would never run out of dating gifts, no matter how many times they gave them away to girls), limited Information Analysis (The Huniebee can tell the basic statistics of any female that the user meets, such as likes and dislikes, and heights and weight), limited Empathic Manipulation via the dating grid, Power Bestowal (Can give others access to the dating grid, which is empathic manipulation), Clairvoyance (Can determine whether someone is a virgin or has an STD by simply looking at them).

Attack Potency: Human level (Has never shown to be physically superior to humans, despite her divine connection)

Range: Melee range, hundreds of meters with the Huniebee

Weaknesses: Doesn’t have any fighting experience

The Huniebee: The Huniebee is a device that presumably all love fairies carry on their person. Used to store information about girls that the user encounters, the Huniebee is also capable of tracking their locations, storing stats such as their favorite food and color, and can serve as an inventory where the user can hold things such as dating gifts and food items. Whether this counts as a type of Hammerspace is unknown.

The Dating Grid: The Dating Grid is one of the signature tools of a love fairy such as Kyu, and with it, she’s able to manipulate the emotions of others and make them feel more of a specific emotions, such as Passion or Sentimentality, and she’s able to get others to like her more based off this dating grid ability as long as she matches the right tokens. This generally would take several minutes to apply, so it would be incredibly difficult to apply in combat. 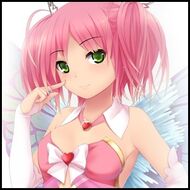 Close up of Kyu 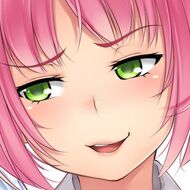 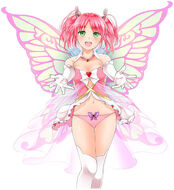 Kyu from the title screen of the first game 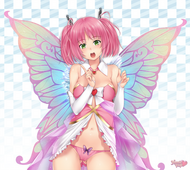 Barney Stinson (How I met your Mother) Barney’s Profile (Both were trying to seduce the other, Barney Had the playbook, Kyu had dating gifts)