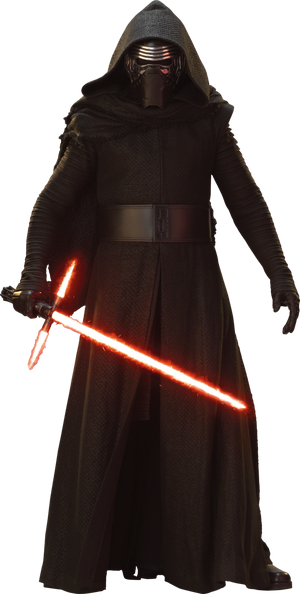 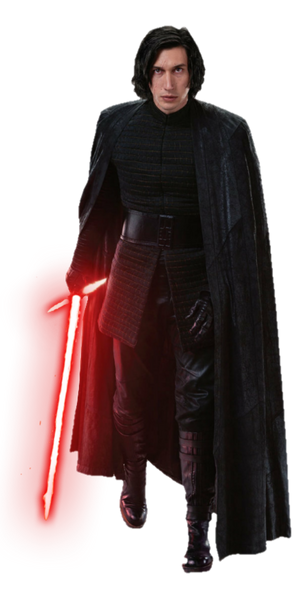 Kylo Ren is a young but powerful Force User who was introduced in "Star Wars: The Force Awakens". Feeling let-down by his father, Han Solo, he was seduced to the Dark Side from the evil Supreme Leader Snoke. He is currently the Commander of (and an important facet of leading) the First Order- a political and military organization which was established approximately thirty years after the Battle of Endor. In addition to commanding the Troops of the First Order, Kylo Ren is also a member of the Knights of Ren: a small organization of a relatively powerful group of Force-Users of the Dark Side. As a result, he took the title "Ren" as a surname. Although he is a relatively new character in the Disney Star Wars Universe, he shows a lot of promise, as he aspires to become just as powerful as Darth Vader; if not more so. Kylo Ren may not be as powerful as other past Siths, but he shows great potential. Also, he helms one of the most bizarre yet striking Light-Sabers in Star Wars lore: a lightsaber which seems to emit a different type of energy than a standard lightsaber which also has a cross-guard at the hilt.

Attack Potency: Small Building level naturally (Fought and overpowered Finn in lightsaber combat while heavily weakened. Comparable to Rey, and defeated multiple Elite Praetorian Guards, all of whom should be superior to First Order Stormtroopers, alongside her), Large Town level with Force Amplification (Snoke considers him to be the ideal embodiment of the Light and Dark sides of the Force, his power was held in high regard by his uncle and he was regarded as a potentially great Jedi. His telekinesis [defense in context, but it is a power used both offensively and defensively] is described as "immense"; These accolades all point to him be at least on the level of the likes of Clone Wars era Ahsoka Tano and Season 1 and 2 of Rebels Kanan Jarrus). Can cut those with durability similar to General Grievous and AT-AT with his lightsaber | Small Building level naturally, at least Large Town level with Force Amplification (Was capable of evading and countering an enraged Rey's onslaught despite the latter being considerably stronger since their showdown on the Supremacy, and would have defeated her if not for an outside distraction)

Lifting Strength: Peak Human naturally. Can be augmented to Superhuman levels with the Force. Class M with telekinesis (Far superior to Season 1 of Rebels Ezra Bridger and should be at least comparable to Kanan Jarrus)

Durability: Small Building level naturally (Should not be weaker than an average Stormtrooper or a trained Force Adept), higher with armor against directed energy weapons. Large Town level with Force Amplification via power-scaling (Superior to an incompletely trained Kanan, in demonstrating his aptitude for deflecting lightsaber strikes through the power of the Force while already gravely injured, on top of his already superior potential in the Force and "immense" telekinetic defenses, Kylo Ren should be at least as powerful as Ahsoka Tano towards the end of the Clone Wars) | Small Building level naturally, at least Large Town level with Force Amplification

Stamina: High, can fight extreme battles with little hindrance with serious wounds for several minutes at a time

Range: Extended melee range with his lightsaber. Dozens of meters with Force abilities. Likely planetary with Force senses (Superior to the likes of Kanan and Ezra who were able to sense the Dark Side power of Darth Vader on Lothal while still in orbit)

Standard Equipment: His own unique Lightsaber (a cracked Kyber Crystal Lightsaber with two vents to act as a crossguard).

Intelligence: Though young, Kylo Ren has very high intelligence, being both the commander of the First Order military forces and leader of the Knights of Ren, also seems to know every Stormtrooper by number, which is impressive considering the vast amount of them which exist. Skilled and experienced combatant. Considered "unstoppable" on the battlefield of the new trilogy era.

Weaknesses: Suffers continuous mental conflict over his Light Side nature conflicting with his desire for more power in the Dark Side of the Force.

High Templar (StarCraft) High Templar's Profile (Speed was equalized and they fought for 2 matches with the first round restricting the use of the High Templar's Feedback ability while the 2nd round allowed it.)