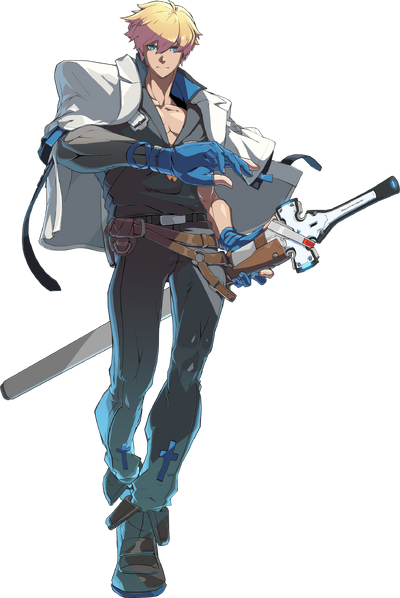 Ky Kiske (カイ＝キスク, Kai Kisuku) is a playable character in the Guilty Gear franchise. As one of the two leading characters (the other being Sol Badguy), he is one of the most well-known characters and has been an integral part of the series since the first Guilty Gear. He is a very charismatic young man who possesses a strong sense of justice and a devout religiosity, which sustain and guide him through all manner of shaking uncertainties.

Powers and Abilities: Superhuman Physical Characteristics, Expert Swordsman, Lightning Manipulation, Regeneration (Low-Mid), Statistics Amplification (Can increase his power with Gear eye and Thunderseal), Power Bestowal (Can bless someone with resistance to backyard), Portal Creation (Can create portals that increases his electricity's capabilities when his attacks were entered), Time Manipulation, Sealing and Petrification (Able to seal someone in a subspace where time is slowed down to an almost halt with their bodies turned into stone with thunderseal), Non-Physical Interaction (Able to hit souls), Self-Sustenance (Type 1), Magic as Information Manipulation, Regeneration Negation (Up to Low-Mid), Resistance to Extreme Cold, Cosmic Radiations, Disease Manipulation (Has Gear cells which cures diseases), Transmutation and Information Manipulation (Resists getting his information rewritten), Material, Spiritual and Mental attacks (Should be able to resist backyard himself, which assaults one's body, mind and soul as he can give someone resistance to it) and Power Nullification (Can hit people beyond twelve steps because of the gear cells)

Attack Potency: Universe level, possibly Universe level+ (Was stated by Leo to be stronger than him. Clashed with Sol numerous times in the past and easily defeated him when serious, Sol also said that he would need all of his power to properly fight him). Able to ignore conventional durability by sacrificing his Thunderseal.

Speed: At least Massively FTL+, possibly Immeasurable (Able to keep up with Sol, making him likely faster than Jack-O)

Stamina: Extremely high (Able to hold off an army of Gears by himself for a while before going down)

Standard Equipment: Thunderseal/Fuuraiken (Pre-GG2, one of the eight Jinki), Aquila (As of GG2), Magnolia Éclair II (As of Xrd -SIGN-)

Intelligence: Genius tactician, can think up clever tactics on the spot, renowned for his control of lightning magic, the most difficult magic to learn.

Weaknesses: He can be tricked due to his great honesty, kindness, and sense of justice. He also hestitates and refuses to fight disarmed people, and children. His Gear Eye lasts for a limited time and then vanishes, leaving him worn out and in pain afterwards. 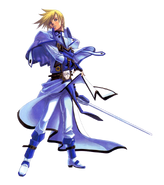 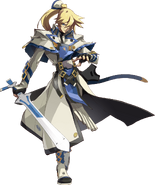 Guilty Gear OST Holy Orders (Be Just or Be Dead)