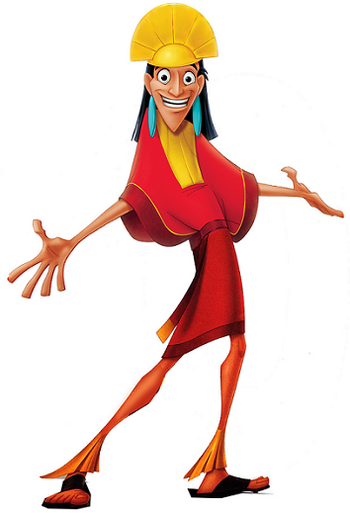 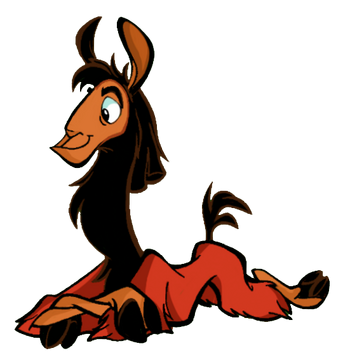 Kuzco (also known as Emperor Kuzco) is the protagonist of Disney's 2000 animated feature film, The Emperor's New Groove. He is the emperor of the Kuzconian Empire in Peru, known for his arrogant and saucy personality. When his ruthless behavior gets him transformed into a talking llama, Kuzco slowly comes to realize the error of his ways.

Skilled in Hand to Hand Combat, Weapon Mastery, Fourth Wall Awareness, Time Manipulation and Time Travel (Via his remote), Social Influencing, Transmutation (Can turn into different animals with pink potions. He can turn into a frog, a turtle and a rabbit)

Attack Potency: Human level | At least Wall level (Can fight against Pacha, who survived this)

Durability: At least Street level+ (Should be more durable than Rudy, who survived this) possibly higher (Kuzco survived getting catapulted from his palace in Cusco to Pacha's unnamed village, possibly the village of Pisac, with no injury) | At least Wall level (Survived this)

Intelligence: Average. Kuzco can bring some good ideas at times.

Retrieved from "https://vsbattles.fandom.com/wiki/Kuzco?oldid=5625819"
Community content is available under CC-BY-SA unless otherwise noted.