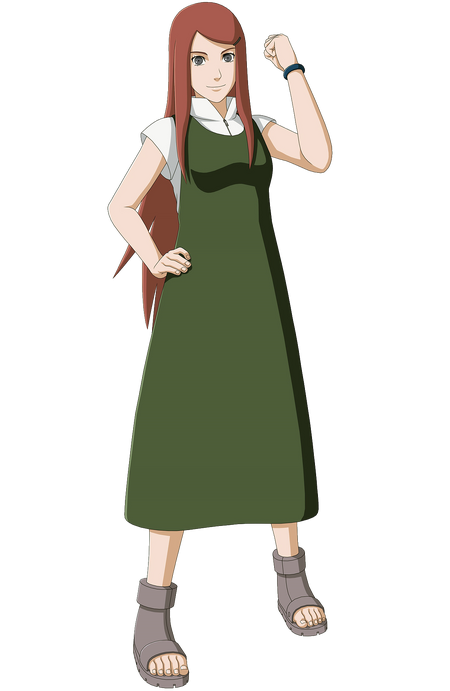 Kushina was a ninja from a village hidden in the former Land of Whirlpools. She was the mother of Naruto, and her lover and husband was Minato Namikaze, the Fourth Hokage. She had long red hair and was a beautiful woman. Most of Naruto's ninja skills and personality come from her. When Tsunade and Jiraiya talked about her, they described her as a talkative tomboy who became more and more beautiful as she grew up, and also had a jutsu-style like Naruto's.

Powers and Abilities: Superhuman Physical Characteristics, Chakra Manipulation, Shapeshifting (Can transform into animate and inanimate objects), Weapon Mastery (Can utilize weaponry like kunai, shuriken, and exploding tags), Explosion Manipulation with explosive tags, Statistics Amplification (Can enhance her physical capabilities with chakra), Duplication (Can create illusionary clones with no substance), Healing, Sealing, Forcefield Creation, Chain Manipulation (Can create the Adamantine Sealing Chains out of her chakra), Expert Acrobat (All shinobi are capable of performing incredible feats of acrobatics far better than most peak humans), Power Nullification (Orochimaru states that the Adamantine Sealing Chains can seal the chakra of a target, completely neutralizing them), Longevity, Speed Enhancement with Shunshin, Surface Scaling, Can replace herself with inanimate objects to avoid damage, Paralysis Inducement (via paralysis jutsu), Non-Physical Interaction (via forcefield creation and sealing)

Attack Potency: City Block level (Kushina became a high-ranking kunoichi famed for her unique ninjutsu style even gaining recognition from the Sannin for her prowess and as such should easily be comparable to Land of the Waves Sasuke who was capable of doing this), Mountain level+ with Chakra chains (Uzumaki Chakra chains have consistently shown to affect or damage things on a far higher level than the users themselves such as restraining tailed beasts or destroying large wooden constructs capable of fending off kage level opponents)

Speed: At least High Hypersonic (Should be somewhat comparable to high-end Genin such as Temari)

Durability: City Block level, Mountain level+ with Chakra Barrier (On the brink of death Kushina was capable of creating a barrier powerful enough that Hiruzen Sarutobi at his prime was unsure if he could get passed it and stated that there was nothing anyone could do)

Stamina: Very high (As an Uzumaki, Kushina was blessed with a strong life-force, granting her tremendous chakra reserves and vitality. This also gave her tremendous stamina, healing powers, and longevity)

Range: Dozens of meters with Kunai.

Intelligence: While not book smart, Kushina is still a very capable of Kunoichi.

Kushina Blazing - Narucole
Add a photo to this gallery

Retrieved from "https://vsbattles.fandom.com/wiki/Kushina_Uzumaki?oldid=6115675"
Community content is available under CC-BY-SA unless otherwise noted.