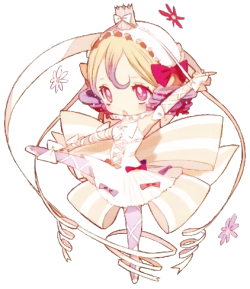 Nozomi Himeno is a magical girl in Arc 3. She's a responsible middle school teacher who loves her job and students, and strives to become better. Captain Grace, Funny Trick, Rain Pow, Postarie, and Weddin are her students. Striving to improve in anything she starts, she’s a hard-worker who wants to be of help to others. She's short and looks very young for her age, enough to pass for a middle schooler, which has made the school's students to nickname her "monster". She's turned into the magical girl Kuru-Kuru Hime by the fairy Toko to fight off "evil magical girls who want to destroy the world". Unlike most of her newly-transformed students, she's suspicious of Toko, and, as the only adult among them, thinks more rationally, and is more willing to consider possibilities.

Powers and Abilities: Superhuman Physical Characteristics, Enhanced Senses, Ribbon Manipulation, Weapon Creation, Weapon Mastery, Forcefield Creation, Danmaku, Can swing herself by using her ribbons to hold onto buildings and objects, Vibration Manipulation, Regeneration (Mid-Low to High-Low Regeneration; Can heal deep wounds, broken bones and broken teeth; most wounds will usually be healed after de-transforming), Self-Sustenance (Types 2 and 3), Resistance to Air Manipulation (no matter where or how fast she moves or fights, she won't be hindered or slowed by air resistance) and Poison Manipulation/Disease Manipulation (their bodies automatically reject their effects)

Attack Potency: Multi-City Block level (Though nowhere near as strong as Post-Unmarked Ripple, Hana Gekokujou, and Pukin, was able to trade blows with them for a while and give them trouble thanks to her ribbons)

Speed: At least Hypersonic+ (Even a weak magical girl can run 2 kilometers in the blink of an eye), Faster with ribbons

Durability: Multi-City Block level for herself (Her body can't handle serious blows from Ripple or Pukin, but is stronger than regular magical girls), Possibly Small City level with ribbons (Far more durable than herself. Even Hana Gekokujou and Pukin had trouble cutting them down)

Intelligence: Smart and logical, thinks before acting. Isn't discouraged easily, and has a good head on her shoulders

Weaknesses: None of the regular human weaknesses. If she becomes unconscious, she turns back into human and loses all the magical girl advantages.

Ribbon Manipulation: Kuru Kuru-hime's magic allows her to freely manipulate the 260 ribbon bits which are part of her costume. She can use the full extent or only part of them, as well as connecting them together, or altering their size and thickness; the thickness ranges from 0.05 millimeters to 50 centimeters. The strength of the ribbons is far higher than herself, able to endure any magical girl's strength or any magical weapon. Her ribbons can help her move around freely, such as jumping between buildings, tying up opponents, or making them vibrate. The ribbons move faster than a magical girl's body, which means her lack of raw strength can be compensated by using her ribbons’ speed. They can also form any shape she wants, like a wheel, shield, weapons, or a drill.

Retrieved from "https://vsbattles.fandom.com/wiki/Kuru-Kuru_Hime?oldid=5675718"
Community content is available under CC-BY-SA unless otherwise noted.