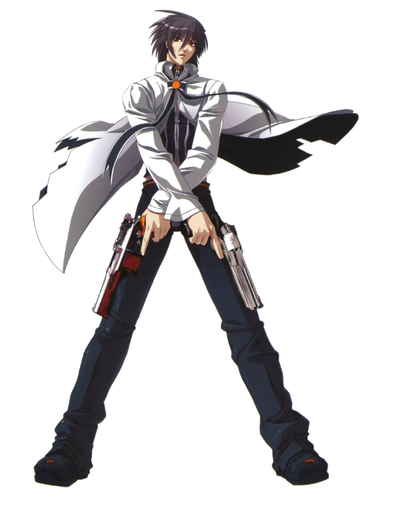 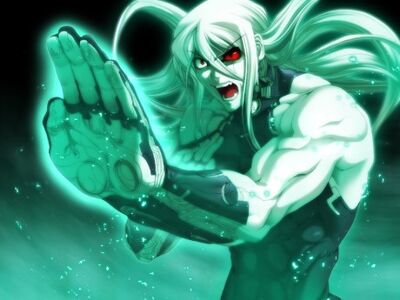 Kurou Daijuuji is the protagonist of Demonbane. He was enrolled as an archaeology student at the Miskatonic University but used this as a cover for his true major in sorcery under the tutelage of Dr. Henry Armitage. During an attempt to break into the library to read one of the forbidden grimoires, he was attacked by Wilbur Whateley and almost killed, causing him to distance himself from the occult and drop out of the university entirely. He continued to work as a private investigator but was financially poor until the day he was hired by the Hadou Financial Group to acquire a grimoire. In his search, he encounters Al-Azif and circumstances force him into a contract with her, becoming the pilot of the imitation Deus Machina, Demonbane (デモンベインDemonbein?). Kurou has a strong sense of justice and morality, claiming that there is no rationale behind his desire to aid and protect others beyond the fact that it would leave him with lingering regrets if he simply abandoned them, a feeling that he describes as "a bad aftertaste". After encountering the inhumanity of Master Therion, he comes to hate the man with a passion, fuelling his determination to destroy the BlackLodge

Classification: Human, Sorcerer, Manifestation of the good of Humanity

Powers and Abilities: Superhuman Physical Characteristics, Flight, Enhanced Senses and Cosmic Awareness (Sorcerers can expand their mind and senses to the point they can feel everything in the universe), Information Analysis (Can analyse his target's magick, allowing him to find information about their nature and their weak points), Flight, Thread Manipulation via Atlach-Nacha, Magic, Body Control (Can change the shape of his Magius Wings to whatever he desires), Can create barriers, Power Nullification (Capable of breaking the effects of spells and even breaching through barriers), Illusion Creation via Mirror of Nitocris, Fire Manipulation via the Scimitar of Barzai, Invisibility (Can use The Mirror of Nitocris to make himself invisible), Capable of Summoning Demonbane, Can attack on a spiritual, mental and conceptual level with Magick (Magick can affect one on a spiritual, mental and conceptual level), Reality Warping (Magick is the fundamental constituent of reality that sorcerers can shape to their will), Information Manipulation (Magick is the act of manipulating information that makes up all existence and make one's own law that disregard reality itself), Law Manipulation (Sorcerers can impose new laws on the world), Resistance to spiritual, mental and conceptual attacks (Shrugs off the heavy toll on his body from using Magick) | Same as before but on a stronger level plus Plasma Manipulation via Cthugha, Ice Manipulation via Ithaqua, Resistance to Life Absorption (Dagon mere presence causes those around it to have their life-force completely sucked out, yet Kurou was unaffected by this ability) | Same as before plus Sealing and Passive Barrier Generation with the Shining Trapezohedron (The mere act of summoning this weapon distorts time and space. It also protects its user from harm by generating a barrier around them that disintegrates whatever that may potentially harm its wielder. Anything struck is also sealed inside it), Resistance to Madness Manipulation (Type 3. Was able to keep his sanity while in the Other multiverse, the home of the Outer Gods)

Attack Potency: Multi-City Block level (Capable of powering up Demonbane and feed it his energy, who can destroy countless buildings and clash with other Deus Ex Machina who can level multiple city blocks. Should be capable of leveling multiple buildings like Al Azif) | At least City level (Demonbane punches are now more powerful than nuclear explosions), possibly Island level (Could fight on equal terms with Dagon who's mere roars are capable of shaking an entire island alongside being heavy enough that its own mass can easily make the island tremble. When using Cthugha powers, he managed to bring ruin to the entire island) | Universe level (Had given enough energy to Demonbane to contend with Cthulhu, whose powers are not only universal but continues growing infinitely due to its cancer. Demonbane destroyed an entire universe during his fight against Liber Legis)

Speed: Hypersonic (Can dodge point blank explosions) | High Hypersonic (Should be capable of fighting against a casual Winfield and Titus, whom while holding back, managed to reach this amount of speed) | Speed of Light (Comparable to Sorcerers in Black Lodge such as Vespasianus whom could fight equally against Sandalphon even while riding the Hunting Horror, which can move at the speed of light), FTL with Demonbane

Durability: Multi-City Block level with barriers (Can tank Doctor Wests mechas attacks which can destroy multiple city blocks in Arkham City. Held his own against Master Therion) | Island level with barriers(Managed to withstand the damage from Dagon attacks and could tank its attacks) | Universe level with barriers (Equal to Sorcerers in Black Lodge who can fight against and even tank Sandalphon attacks)

Stamina: Extremely High. Even when suffering grievous injuries, even when invoking spells that could easily destroy his mind, he still kept on fighting through pure will.

Intelligence: While sometimes seen as the buttmonkey, he is quite insightful, noticing abnormalities he encounters. He's also skilled in combat, adapting greatly against his enemies and additionally, he displayed various tactics when it comes to using his abilities, such as making an illusion of himself while hiding his presence to unleash a surprise attack on his enemy.

Weaknesses: Genuine Sorcerers like Kurou relies on Grimoires to achieve magick, therefore, should he lose Al Azif in someway, he'll lose the ability to use magick. | None Notable