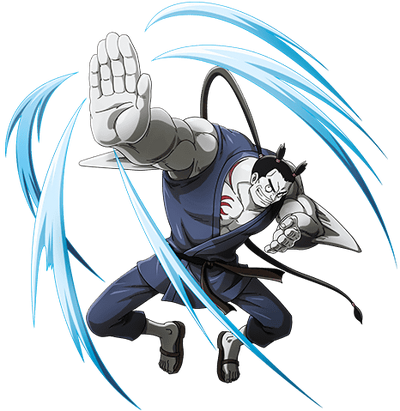 Kuroobi is a ray fishman, first mate of the Arlong Pirates as well as a former member of the Sun Pirates. He is a 40th rank practitioner of Fishman Island Karate. Though similar to his captain in their disdain of humans in general, he has some respect for those whose strength impressed him but still will act cruel overall. He is a very cautious person, as he's the only one to not trust Nami, and was proven to be right.

He was later defeated by Sanji and arrested along with the entire crew. Hatchan was the only one to escape.

Weaknesses: If his gills are blocked, he can't breathe underwater. The same way if air enters his gills he'll suffer of drowning.

Fishman Karate (Gyojin Karate): A martial art that is practiced by certain members of the fishman race. While deadly enough on land, Fishman Karate has a number of devastating underwater moves designed to be suitable with the Fishmen strength and speed along with the mobility that goes while under water and, in some cases, a fishman's personal adaptation (fins, teeth, etc.). The secret of Fishman Karate is mastery of the water in the user's direct vicinity, using its power to send powerful waves impacting the water within the opponent's body. Although Kuroobi has never demonstrated this quality even being a 40th level of practitioner.