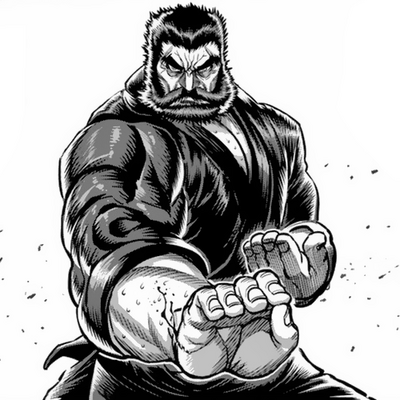 Kuroki Gensai, also known as The Devil Lance, is a renowned assassin in the criminal underworld and the affiliated fighter for Motorhead Motors in the Kengan Annihilation Tournament. Kuroki is a generally stern and taciturn individual, who does not make idle chatter and only speaks when necessary, avoiding being wasteful with his words and his time. Despite adamantly refusing to accept apprentices, he seems to be a natural teacher and tends to teach by example in the middle of combat, even though he himself denies this.

Speed: At least Hypersonic+ (Fought with Hypnotized Rei who is the fastest Fighter in the Annihilation Tournament by a mile, making him far superior to Akoya who is this fast)

Lifting Strength: Class 5 (Should be comparable if not superior to Julius who can lift F1 car)

Striking Strength: Building Class+ (His Devil Lance in considered an insta-kill by all of the Fighters, even Agito and Ohma)

Stamina: Very high. He trains Kaiwan Style for extremely long amount of time, continuously training his hands and feet even they are damaged or shredded and continue to every single joints in his body. Was able to fight against Ohma right after his bloody fight against Agito.

Intelligence: Genius when it comes to combat. A master of the Kaiwan Style, Kuroki Gensai is an extremely powerful unarmed combatant, having defeated many renowned and powerful opponents. The High Priest of the Daisen Temple remarked that Kuroki was the avatar of a Wisdom King, adding that he had never seen anyone as powerful and skilled as him in his 105 years of life. Through a combination of his training, his experiences from his lifetime of fighting and assassinations and his overwhelming skill, Kuroki is easily one of the strongest fighters introduced in the series. As a component of the Kaiwan Style, Kuroki is able to use karate to a masterful level, with Himuro saying he had never seen anyone use karate so perfectly. The combination of his excellent martial arts prowess and his masterful predictive capabilities give Kuroki almost impregnable flawless defensive abilities. Kuroki is also noted to be able to perform the impossible, such as when he reset his dislocated elbow using centrifugal force. He is a man who has reached the pinnacle of martial arts and put it into practice, "using the right technique, at the right moment".

Weaknesses: He pulls punches on those he deems weak.