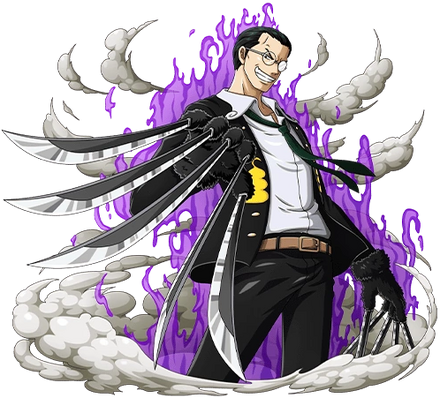 Kuro, also known as "Kuro of the Thousand Plans", is the captain of the Black Cat pirates from East Blue and is one of the first villains to appear in One Piece. He is cold and cunning, known for coming up with elaborate plans that never failed. His fighting skills allow him to move silently at incredible speeds to slaughter people in the blink of an eye. However, he eventually tired of the pirate life, setting up schemes for his crewmates, and of constantly being hunted down by the Marines. So he hypnotized the crew's shipwright Nugire Yainu into believing he was Kuro and allowed him to be executed in his place, which allowed him to leave his crew.

Making his new home in Syrup Village, he became Klahadore, the butler for Kaya. From there, he plotted to assassinate Kaya to obtain her vast fortunes and completely retire from his pirate life. However, Monkey D. Luffy and his allies, along with the town citizen Usopp, put a stop to his plans.

Powers and Abilities: Superhuman Physical Characteristics, Skilled with his Claws, Genius-Level Intellect, Speed Boost via Shakushi, Stealth Mastery and Limited Sound Manipulation (With "Silent Slep" technique), Berserk Mode in Crescent Moons Nights (Goes into a insane and bloodthirsty state where every cell in his body gets excited).

Standard Equipment: "Cat Claws", 10 katana - length blades attached to the tip of each finger on gloves

Intelligence: Master strategist, was known for his plans never failing, manipulated many people and faked his death, would have succeeded in tricking the marines if it wasn't for the Straw Hat Pirates

Weaknesses: When using Shakushi, he cannot see where he is going and attacks randomly, he goes into a berserker rage and attacks anyone, even allies, when he sees a crescent moon