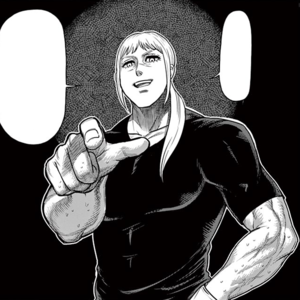 Kureishi Mitsuyo, also known as The Monster is Imai Cosmo and Adam Dudley's master, an MMA fighter and a chiropractor. He is also close friends with Nishihonji Akira. Kureishi is a powerful individual with a youthful hairless face, long blonde hair that he ties into a ponytail with two long bangs framing his face, countless battle nicks covering his skin and a slice-like scar that runs horizontally across his nose.

Powers and Abilities: Superhuman Physical Characteristics, Expert Martial Artist, Aura (He is so in love with breaking other people's bones that he has an extremely scary aura around him whenever he fights), Paralysis Inducement (Capable of inducing paralysis by hitting specific points with his palms) and Statistics Reduction (Capable of heavily reducing the opponent's movements with any part of their body with his special massage that can be used even in combat)

Attack Potency: Building level+ (Should be likely superior to Imai even in Kengan Omega and likely at least comparable to Okubo due to being one of the top 10 MMA fighter in Japan)

Speed: Hypersonic+ (Should be comparable to Imai)

Stamina: High (Able to fight after being hit by a devastating strike from Asura Samato and his face almost being cut in half)

Intelligence: Gifted (Kureishi is one of the best MMA fighters in Japan, being the undefeated lightweight champion. He is also skilled at massage and anatomy that he can paralyze opponents with it mid-fight)

Standard Tactics: Emits an aura of Bloodlust when he fights

Retrieved from "https://vsbattles.fandom.com/wiki/Kureishi_Mitsuyo?oldid=5725717"
Community content is available under CC-BY-SA unless otherwise noted.