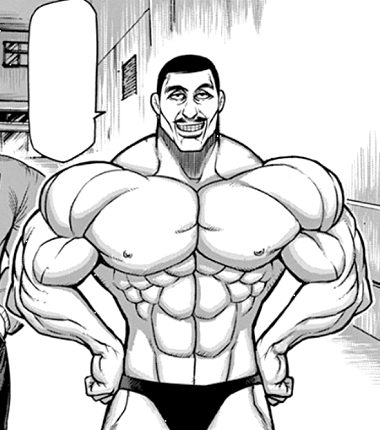 Kurachi Karugo, also known as God of Pro Wrestling is a Super Japan Pro Wrestler as well as one of Sekibayashi Jun's mentors. He was a prominent fighter in the Rokushin Kaikan Tournament years before the events of Kengan Ashura.

Speed: Hypersonic+ (Kept up with Mentaro)

Stamina: High. Pro wrestlers are able to fight for hours.

Weaknesses: Due to being a pro wrestler, he doesn't block or dodge, and instead take full brunt of any attacks he takes.

Retrieved from "https://vsbattles.fandom.com/wiki/Kurachi_Karugo?oldid=5637973"
Community content is available under CC-BY-SA unless otherwise noted.