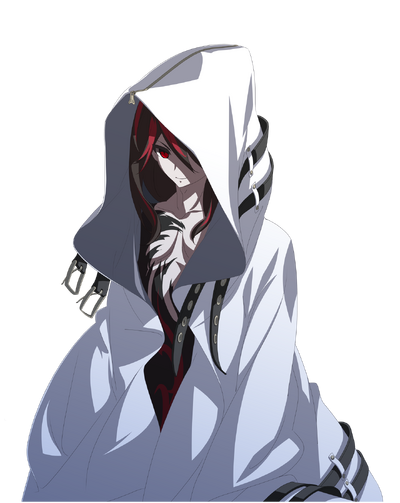 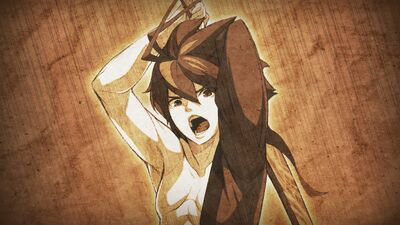 Kuon is a character from Under Night In-Birth and serves as the main antagonist controlling everything from the shadows. In truth he is the older brother of Linne and the former leader of Night Blade. It is unknown as to what his goal is and to why he went from a righteous warrior to a manipulator behind the scenes.

Name: Kuon, "The Eternal", "The Weaver of Eternity"

Powers and Abilities: Superhuman Physical Characteristics, Martial Arts, Sword Mastery, Existence Erasure (Insulator rends one's existence or more specifically the "source of all things" with its strikes. EXS is directly noted to be equal to one's existence. Can drive one's EXS from their body); Can kill Immortals (Type 5), Energy Projection (Can various blasts and slashes with Insulator's dark powers), Enhanced Senses (Can sense and perceive Voids who normally cannot even be seen by humans), Non-Physical Interaction, (Can kill Nonexistent beings; Can kill Voids), Durability Negation (Can break through most conventional types of defenses), Immortality (Types 1 and 5), Energy Absorption (Via Insulator drawing in EXS to power it's devastating attacks), Teleportation, Regeneration (Low), Extrasensory Perception, Corruption and Paralysis  (When someone would try to kill him, his EXS will activate and that person will be drowned in EXS, rendered unable to move and transformed into a mindless Void), Resistance to Madness Manipulation (Type 3. Able to perceive Voids and not be driven mad at the sight of them), Corruption, Paralysis Inducement, Fear Manipulation, Soul Manipulation, Disease Manipulation and Age Manipulation (Cannot age and as a Re-Birth he has eternal youth) | All previous abilities minus those granted by Insulator, Teleportation, Fog Manipulation (Can create fog to hide himself from enemies), Aura, Avatar Creation, Darkness Manipulation, Illusion Creation, All powers from EXS and being a Void

Attack Potency: At least Town level (Stated to have the power of a Re-Birth in which is a state of power Hilda herself wishes to reach meaning that he is likely much stronger than even her) | At least Town level, possibly higher (Should be superior than his teenage self which was already a Re-Birth. Stated by Hilda to be one of the most powerful beings in the world)

Speed: Lightspeed (Comparable to the other characters. Fought with Waldstein)

Intelligence: Kuon was noted to be a naturally skilled combatant despite his lack of experience. He was able to fight and defeat Waldstein in a battle of power and skill. Waldstein was a general who has fought in countless wars against countless skilled warriors beforehand.