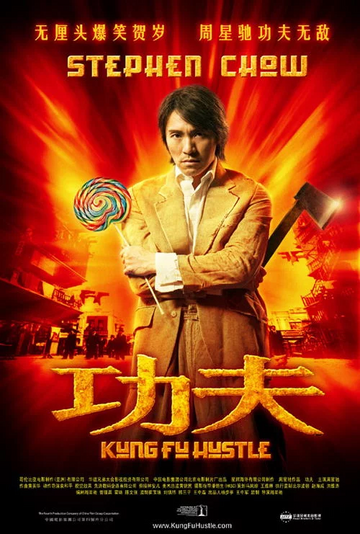 Kung Fu Hustle is a 2004 action comedy film directed, produced and written by Stephen Chow, who also stars in the lead role. The other producers were Chui Po-chu and Jeffrey Lau, and the screenplay was co-written with Huo Xin, Chan Man-keung, and Tsang Kan-cheung. Yuen Wah, Yuen Qiu, Danny Chan Kwok-kwan and Bruce Leung Siu-lung co-starred in prominent roles.

1930s Shanghai is in the grip of various gangs struggling for power, with the Axe Gang being foremost. Main character Sing is an ineffectual small-time crook trying to join the Axe Gang. In doing so, he and buddy Bone attempt to command respect from the Pig Sty Alley. Their bumbling attracts the real gang, who are repelled by the martially-skilled Coolie, Tailor and You-Tiao (fried dough sticks) baker. What results is an Escalating War between the Axe Gang and the (unusually strong) residents of the impoverished Pig Sty Alley.

This verse is quite strong for a martial arts movie standards with even unnamed characters being Superhuman level, while others ranking from Wall level to Building level at peak.