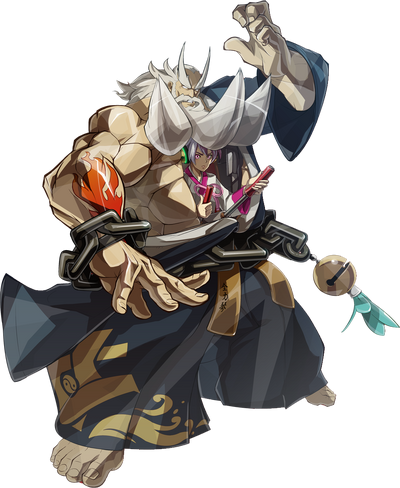 Kum Haehyun (琴 慧弦) is a character in the Guilty Gear series. She is the descendant of a family of Tuners, who are known to have great knowledge of Ki energy. She controls a robot with the form of an imposing elderly master known as Kum Jonryoku.

Powers and Abilities: Superhuman Physical Characteristics, Has control over a robot which she can control at will, Self-Destruction, Energy Projection, Telekinesis, Gravity Manipulation (Able to pull and push her opponents from her), Duplication (Can make several duplicates of her fists), Matter Manipulation (Can control the state of matter with tuning), Martial Artist, Healing, Statistics Amplification, Statistics Reduction (Able to reduce opponent's strength to the point that a person normally has a threat to her can be defeated by nothing more than a flick), Power Nullification (Nullified Justice's information flare for a while), Information Analysis, Magic as Information Manipulation, Chi Manipulation (Able to manipulate the flow of ki by tuning), Extrasensory Perception (Can see others flow of ki), Absorption (Absorbed ki energy from Shinju tree), Reality Warping and Possible Law Manipulation (She has the ability of tuning, and said that everything that governs her opponent and the environment around him/her is now under her command with this power)

Intelligence: Gifted as she has wide amount of knowledge about the flow of the world and ki.

Retrieved from "https://vsbattles.fandom.com/wiki/Kum_Haehyun?oldid=5463149"
Community content is available under CC-BY-SA unless otherwise noted.