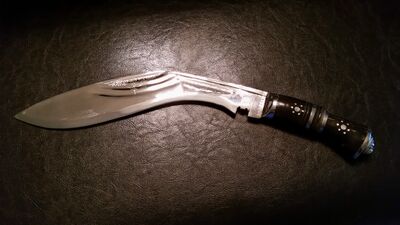 The kukri, also known as the khukuri (Nepali: खुकुरी khukuri) is a knife, originating from the Indian subcontinent, associated with the Nepali speaking Gurkhas of Nepal. The knife has an inwardly curved blade, similar to a machete, used as both a tool and as a weapon in Nepal and India. Traditionally, it was, and in many cases still is, the basic utility knife of the Gurkha. It is a characteristic weapon of the Nepalese Army, the Royal Gurkha Rifles of the British Army, the Assam Rifles, the Assam Regiment, the Garhwal Rifles, the Gorkha regiments of the Indian Army, and of all Gurkha regiments throughout the world, so much so that some English-speakers refer to the weapon as a "Gurkha blade" or "Gurkha knife". The khukuri often appears in Nepalese and Indian Gorkha heraldry and is used in many traditional rituals such as wedding ceremonies.

The kukri, khukri, and kukkri spellings are of Indian origin, the original Nepali form being khukuri.

Age: Possibly 200 years old (The first evidence of the kukri was found out in the early 19th century)

Classification: Inwardly-curved Blade/club that originated from Nepal and is the signature weapon of the Gurkha

Wielders: Several Gurkha soldiers of the Indian and Nepalese Army. Also used by the Singaporean Gurkha Regiment as standard equipment

Attack Potency: Street level (While its function is not much different from a machete, it is also usable for daily household jobs like cutting wood, farming, digging and so forth. Easily capable of brutally goring humans and cutting through bone. Bishnu Shrestha is a renowned military soldier known for his gallant conduct against armed robbery, even fending off several robbers with just a kukri. The Gurkha regiments are known for their valor and their extensive usage of the knife. The design of the blade itself means it can also be used in the manner of a sword)

Speed: Varies, depending upon the user

Durability: Street level (Even when repeatedly used for chopping wood and other household activities, the blade still maintains its edge)

Retrieved from "https://vsbattles.fandom.com/wiki/Kukri_(Real_World)?oldid=3594620"
Community content is available under CC-BY-SA unless otherwise noted.