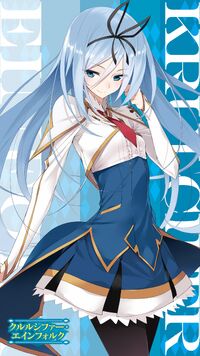 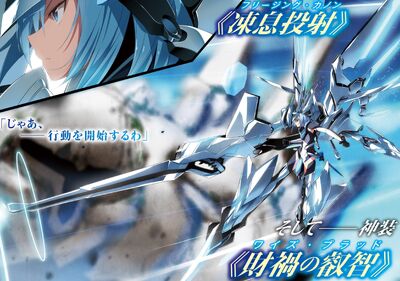 Krulcifer Einfolk is one of the protagonists of Saijaku Muhai no Bahamut. She is an honor student at Royal Knight Academy who was found in the Ruins of Ymir by the head of the Einfolk House.

Age: Unknown, but treated as a 17 years old

Stamina: Krulcifer, as an Xfer, has an extremely high compatibility with Drag-Rides, allowing her to use a Divine Drag-Ride like Fafnir for longer periods of time than any normal human should normally be able to. During the New Kingdom arc, Krulcifer received a Baptism, which can inflict agony beyond imagination, being described by people who survive them as having their blood boiling in addition to feel pain across their entire body, and stated by Singlen to tamper a lot the nerves in the whole body, and recover from it.

Weaknesses: Since her flesh becomes one with her Drag-Ride with Full Connect, her durability is lower than it would normally be. Lacking in short ranged skill, but overcame this weakness by the time of the New Kingdom arc.

Retrieved from "https://vsbattles.fandom.com/wiki/Krulcifer_Einfolk?oldid=6122948"
Community content is available under CC-BY-SA unless otherwise noted.