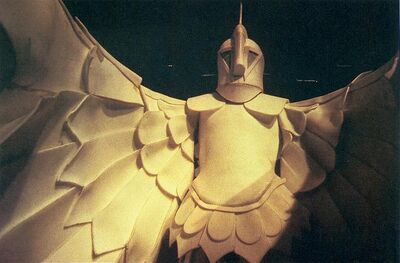 Powers and Abilities: Superhuman Physical Characteristics, Immortality (Type 1, 2, and 3), Flight, Acausality (Type 4; Exist above and outside of time, unaffected by temporal paradoxes), Higher-Dimensional Existence (Composed of sixth-dimensional matrices), Reality Warping, Time Manipulation, Teleportation, Time Travel, Dimensional Travel (Can travel between the Time Vortex and Six-Fold Realm. If summoned into the universe, they can move between alternate dimensions), Power Nullification (Jammed a TARDIS' ability to move in and out of the Time Vortex), Deconstruction (Elektra, an Eternal, was able to shred matter down to the Quark level with her screams), Existence Erasure and Age Manipulation (Described as the gardeners of the multiverse, who weed out alternate universes. Forced millions of universes into a state of heat death, can devour time and age beings to death), Biological Manipulation (Made The Monk's mouth disappear), Clairvoyance, Avatar Creation (Created Paul Kairos to manifest as a human)

Intelligence: Rather intelligent, but can also lose his mind during berserk states

Start a Discussion Discussions about Kronos (Dr Who)